The largest and most luxury SUV are the ones belonging to E and F segment. They could be together in the same segment but some of them are bigger than others so for better reasons they are separated, though in terms of prices all of them are really expensive. This kind of SUV were born in the US, where American consumers love really big cars with enough interior room and enormous engines. It is why America is the largest market for them and last year there were sold almost 1.2 million ‘E-SUVs’ and more than 270.000 ‘F-SUV’. Those are really big numbers which are followed by China, where more than 100.000 units were sold, and Canada with 92.000 units*. But in terms of market share the situation changes. All Middle East markets love them. In Qatar 25% of the cars sold are ‘E/F-SUVs’, followed by United Arab Emirates, 22%, and Kuwait, 21%. Oil-economies love fuel consumption.

The Kubang can reach interesting numbers if it is correctly positionated making use of Jeep’s know how. Photo by http://www.autoevolution.com

As it was said before Americans created the segment so they are the most popular. Ford, Lincoln, Jeep, Dodge, Chevrolet, GMC and Cadillac are the kings of the road. But they are not alone. British have always had the Range Rover as a referent, while Germans have some offer with Mercedes, BMW, Audi, VW and Porsche. Japanese are also strong with their big Toyotas (some of them are among best-selling cars in the Middle East) and the giant Nissan Patrol. Chinese are just begining to have some offer but they are more focused on smaller SUV as big ones become popular. Fiat-Chrysler position in the segment is small but strong. The Jeep Grand Cherokee (E-SUV segment) is perhaps  one of the most populars referents of the segment not only in America. Its nameplate is known everywhere in the world and means strength, power and luxury. All of its generations have been popular but the latest one has gained more reputation among luxury options. Based on it Dodge offers the Durango, another big SUV with opposite results. Since it was launched 2 years ago, the car has never gained an important place in the segment no matter it is more or less the same product of the Grand Cherokee. Fiat is now working on the launch of new Maserati Kubang (presented in Frankfurt 2011) as a direct rival to Porsche Cayenne and Range Rover. According to what they showed so far, it seems Maserati will have a great product with the latest technology and best Ferrari and Chrysler engines.

Unlike the Grand Cherokee, the Durango has never been popular since its launch in 2011. YTD sales figures drop 20.76% in USA. Photo by http://www.netcarshow.com

In 2011 Fiat-Chrysler had 15% of the segment in America and 16% in Canada. In Europe the Jeep counted for 8.6% of the segment in Switzerland, 9% in Poland, and almost 10% in Italy. In Latinamerica, it had 16% of the segment in Argentina, 20% in Dominican Republic and 57% in Venezuela! In the Middle East, the Grand Cherokee had 10% in Oman and 12% in Bahrain. Those are not bad numbers at all and if Fiat knows how to positionate the Kubang making use of Jeep expertise, they could gain even more market share thanks to great products. 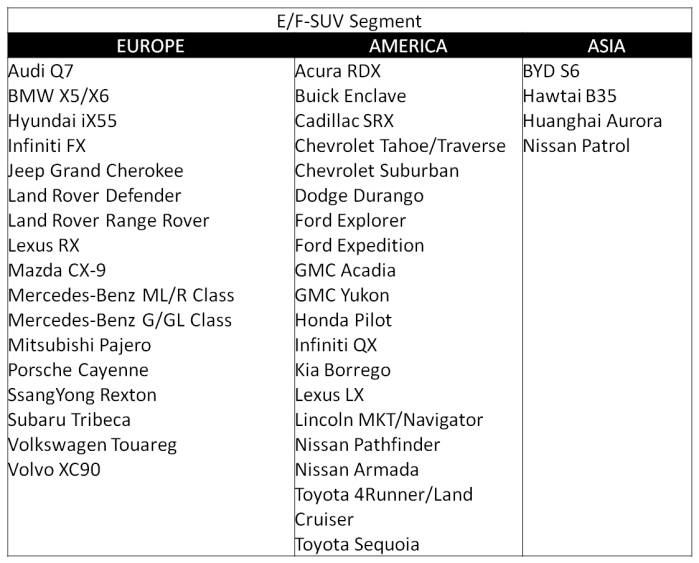 3 thoughts on “Learning about cars: the ‘E/F-SUV’ Segment”