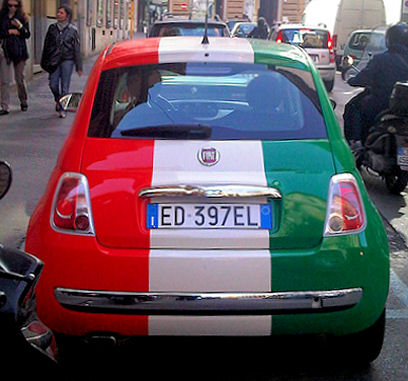 September 2012 was again a terrible month for Italian car market, down a massive 25,7%, the biggest fall since March 2012. Italians bought 37.000 cars less than one year ago, 44.000 less than two years ago, and 80.000 units less than in September 2009. That’s why specialized press has constantly said that there is a demotorizzazione of the market, which means that Italians are not buying cars as they used to since late 60’s till 5 years ago. Partly because of current European economic situation and partly because those years in which Italian government helped people to buy cars are gone. Fiat is part of the problem and the solution, but this time it seems it will have to do more by itself than with Italian support. In September the whole group sold 24,2% less than one year ago, again a bit better than total market. Fiat gained more market share while some of its main competitors contributed to a deepest fall of the market: Ford (-38%), Opel (-34%), Citroen (-32%) and Renault (-38%). In the other hand, VW was down only 13%, and Peugeot -5%. But the fact that there are other losing more market than Fiat does not mean that the situation of the Italian group is not bad. Certainly a double-digit fall is a worrying issue because it means that there is no such big market they had in mind when they built the factories all over Italy. Of course first victims of this disaster are new models that required a big investment for its development and now they don’t find the clients. Old models can do it better from the point of view of profits as their development costs are already amortized. Obviously less innovation means less sales, so the key is to find the right scenario for investment, innovation and sales. 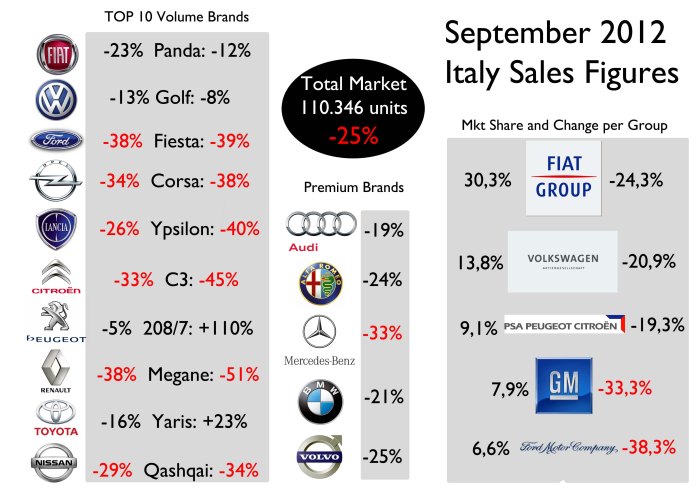 Sales figures and variation for September 2012/2011. Source: http://www.bestsellingcarsblog.net and UNRAE

Fiat brand was down 23% due to the Punto and surprisingly the Freemont, which was down a massive 53%. It is the first time it happens with this Crossover, as it was having very good results since its launch last year. There are two possible reasons: the first one could be the beginning of decline period of the Freemont as it was not an all-new model when it was introduced. And the second one, more feasible, is the emerge of new Fiat 500L, which had its first complete month in the dealerships. Last month 938 Fiat 500L were sold in Italy, 29 more units than Fiat Freemont. The Freemont sells around 1.500 units per month. Though they are not direct rivals, as the 500L belongs to ‘B-MPV’ segment while the Freemont is a ”D-MPV’ and their prices are quite far away from each others, it all seems that the new 500 MPV got some sales figures of its bigger brother. At the end most of Freemont’s offer is composed by 5 seats with diesel engines, which is pretty much what the 500L offers: 5 seats with lots of efficient diesel engines, and during this difficult times, some families would choose the cheapest option, no matter the big difference there is between them. Lancia’s sales figures dropped 26% because of the big fall of the Ypsilon, down 40%! Why a new car as the Ypsilon is having such bad results? car sales per segment indicate that ‘B-Segment’ is the most affected one with current crisis as the few people who buys a car are not looking for the traditional 5 door compact hatchback but for cheaper ones no matter the car is smaller. The Ypsilon is part of that change. Alfa Romeo sold 24% less, which is not bad at all as it depends on only 2 models, one of them extremely competitive but the other one far away from that denomination. The Giulietta continues to impress no matter the great power the VW Golf has in Italy and the new competitors coming from Germany. There is no doubt that Alfa Romeo guys must be really worried about coming months when the new generation of VW Golf will arrive. Jeep has the worst result, down an impressive 59%. It seems the new Grand Cherokee can not do it by itself and the lack of modern ‘C-SUV’ offer affects considerably Jeep’s total registrations. Ferrari was down 52% and Maserati -55%.

Italy car sales by segment A, B and C. (e) for estimated. Source: http://www.bestsellingcarsblog.net, UNRAE

938 Fiat 500L were sold in September. It allowed it to be the second best-selling small MPV in Italy. Source: http://www.bestsellingcarsblog.net