Fiat-Chrysler has released third quarter results and its forecasts for coming months. As it was already said in previous posts, both groups together got more trading profit than expected by analysts but with big differences between Fiat Group (Fiat, Lancia, Alfa Romeo, Fiat Professional), Chrysler Group LLC (Chrysler brand, Jeep and Dodge) and premium brands (Ferrari and Maserati). Certainly Fiat should be really happy after having the majority of the ownership of Chrysler, as the American car maker contributes to a big part of the incomes and profits. Something that 3 years ago was almost impossible and Fiat was not facing current difficult times in Europe. The third quarter of 2012 confirms the good trend of North America (USA, Canada and Mexico) division, the leadership of Fiat in Brazil and the poor results of Italy and Europe, while Asia-Pacific region continues to be really small in terms of both, units sold and income. It also reveals that with current crisis in Europe, the group focuses much more on American market than before and Europe represents burning cash for at least 2 more years. In other words, the good result showed by Fiat on Tuesday is mainly explained by the awesome recovery of Chrysler division in USA and Canada, and it can be seen not only in the income coming from that zone, but also in the profits.

Asia-Pacific region was the best in terms of performance but is still really marginal in terms of share. North America was the region with highest income and profits. Source: Fiat-Chrysler 2012 Q3 Report

Starting with the Profit and Loss Statement, the first good news is that group’s income was up 16% compared to 2011 Q3. Total income was 20.4 billion euros, 2.9 billion more than one year ago. At this point it is important to mention how Chrysler counts on this total income with more than 58% of it, when one year ago it was 50%. The good results on car registrations of Chrysler brand, Jeep and Dodge, and the good mix of price, and at the same time, the terrible sales registrations of Fiat Europe, contributed to this change. Chrysler Group LLC raised its income up to 3.2 billion, or 37%, while Fiat Auto’s income was down almost 4% or 323 million euros. While income was up 16%, total production costs were up a bit more, 17%, so Trading Profit advanced 12% or 100 million euros, much more than 63 million euros that analysts expected. Considering other incomes/expenses not related to the business, the group’s EBIT (Earning Before Interest and Taxes) is 880 million euros, up 7%. During that period of time Fiat-Chrysler had less financial expenses (-27%) which helped to rise Earnings before taxes up to 71% or 199 million. In the Balance Sheet, current assets seem to be much more than current liability (due to lack of detailed data) which means the company is ensuring liquidity. Almost 27% of total assets correspond to Fixed Assets, which is not a small number, while Inventories count for 12% of it and are up almost 10%. Third Quarter Earnings before taxes was 31% of YTD’s, which was 1.533 million euros. In terms of liquidity, the group can use up to 20 billion euros, including 3 billion bank credit’s lines not used. From that amount of money, 49% correspond to Fiat Auto. According to the group’s Net Industrial Debt and Available Liquidity report, during the third quarter they run out of some cash (1.7 billion euros) to pay some debts. It means total debts went down from 28.5 billion euros in June 30th to 26.7 billion in September 30th, but at the same time available cash diminished 2.7 billion euros. Those results, in current context of uncertainty about the future economy of developed world, are not bad at all. 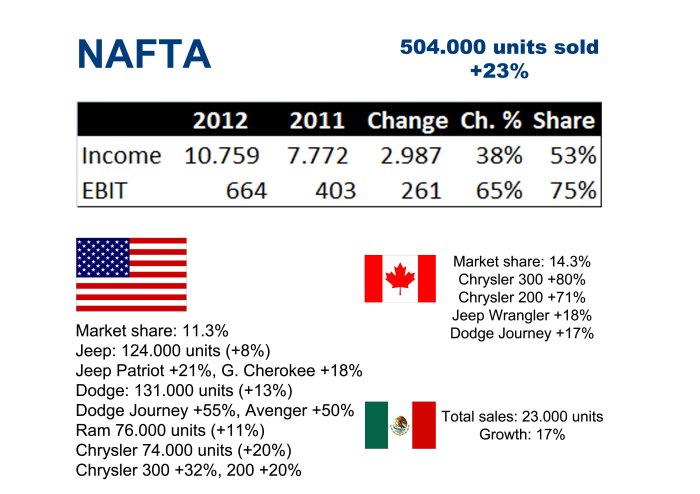 North America contributed to get 53% of total income of the group (in million euros) Source: Fiat-Chrysler 2012 Q3 Report

In Latin America sales went up but not profit due in part to inflation costs and exchange rate variation (in million euros). Brazil represents 90% of LATAM region registrations. Source: Fiat-Chrysler 2012 Q3 Report

Asia-Pacific is still the region with less market share. Jeep could be considered the most successful brand over there but soon Fiat should introduce more models in China to increase its registrations in world’s largest car market (in million euros). Source: Fiat-Chrysler 2012 Q3 Report

By regions, NAFTA (North America) counted for 53% of total income, or 10.8 billion euros, up a massive 38%, and of course most of it (more than 95%) coming from Chrysler Group LLC. It means that more or less Chrysler’s income was 10.8 billion in North America plus 1.2 billion outside that region. It also shows the strong dependence of that group on North America region. Compared to 2011 Q3, Europe’s income occupied second place, after NAFTA, counting for 25% of total by that time. In 2012 Q3, Europe, aka EMEA, counted for 19% of the income, and was the only region to decrease its income by an alarming 13%. By the end of September/2012, Latin America was really close to Europe’s results in terms of income, only 865 million behind. LATAM region’s income was up a tiny 4% and lost share in total income passing from 16% one year ago to 14% in 2012 Q3. However if European situation continues like this, Latin America will become soon the second largest source of income for the group. After them come Asia-Pacific, aka APAC, and luxury brands (Ferrari and Maserati) which raised its income from 640 million in 2011 Q3 to 667 million this year. In terms of profits (EBIT), it is certainly the luxury brands that have the best ratio EBIT/Income, or in other words the most profitable division, as 13% of its income becomes profits. The problem is that this profitable division counts only for 10% of the 880 million euros of EBIT gotten by the group. Once again, North America had the biggest EBIT with 664 million, up 261 million euros. Europe burnt 219 million euros, when one year before it did the same but less amount, 136 million. Without Europe and other activities, the group would had got 1.2 billion euros EBIT in the third quarter.

Ferrari is still the most profitable brand of the group but now is having problems in Italy and some EU countries. Maserati is far behind but is still very profitable (in million euros). Source: Fiat-Chrysler 2012 Q3 Report

Notice that even though NAFTA’s income is 3.6 times larger than LATAM’s income, in terms of profit it is just 2.1 times larger, which means that Latin America is getting more with less money. NAFTA’s result in terms of profits is due to higher industrial costs, related to the expansion of production capacity and advertising expenses as well. In Latin America, particularly Brazil, the group has benefited from new government laws that consist of lowering taxes levels to locally made cars. It allowed Fiat to increase its market share over there. In Argentina, the other big market for Fiat in Latin America, things did not go that well as because of delays caused by customs for imported vehicles, the group sold fewer cars and had a lower market share. What also concerns is the results of the group in the other countries of LATAM. Outside Brazil and Argentina, Fiat-Chrysler sold only 11.000 cars in 3 months, 8% less. Compared to Brazil and Argentina’s figures, these numbers are marginal and reflects the strong and toxic dependence of Fiat on those two markets, when there are other interesting ones just beside them: Chile, Peru, Colombia. The positive trading profit in Latin America was possible thanks to more car registrations, a better mix (price, product) and strong efficiency of the factories, that compensated inflation, more expenses related to the launch of new models and exchange rate differences. In APAC, Asia-Pacific, the good result is mostly explained by good Jeep registrations in China (+114%). The brand represents 69% of the group’s sales in that region. However Fiat-Chrysler’s market share in that region is still marginal (they only sold 26.000 cars). Finally, in Europe the bad results in terms of profits (EBIT: -219 million euros), the good efforts looking to improve efficiency of the factories (World Class Manufacturing), and reduce costs and CAPEX (Capital Expenditure) were not enough to compensate the fall of demand in Italy, France, Germany and Spain. Then there are Ferrari and Maserati, which had different results. The first one continue to be Fiat-Chrysler most profitable brand as 15% of its total income (up 6%) remained in the company as profits (EBIT), while Maserati, which incomes raised 4%, had the same EBIT of one year ago, 8 million euros. Ferrari’s results are explained by North America’s good registrations (+18%), as Asian sales are stable and European ones are affected by the fall of Italian demand. At the same time the good results of personalization program and licenses have contributed to the good result. In the other hand there is Maserati with less car registrations (-2%), due to less demand in Europe which had a bigger effect on total sales than what happened in America (+12%) and the Middle East (+24%).

Good result for incomes and profits taking into account the uncertain situation there is in developed economies. Notice the high incidence Ferrari prices have on the Earning/car sold in premium brands. Europe burns money (in million euros). Source: Fiat-Chrysler 2012 Q3 Report

At the end the group indicates that it confirms its forecast for the rest of the year for 3 of its 4 regions: NAFTA, APAC and LATAM. Regarding Europe, Fiat-Chrysler believes the situation will continue to be bad at least for 2 more years. Third quarter results show that current situation is bad for Fiat Europe but good for the group as it is forcing it to move to other regions and therefore decrease its toxic dependence on Italy and Europe. It also reflects how well business are doing in North America, and how difficult the situation can get in Latin America with more competition and strong dependence on Brazil. And finally, what should be an alarming fact, Fiat-Chrysler needs urgently to increase its presence in Asia as fast as Ferrari increases its profits. Not being there means the group won’t be global, and it means not being viable as a car maker.