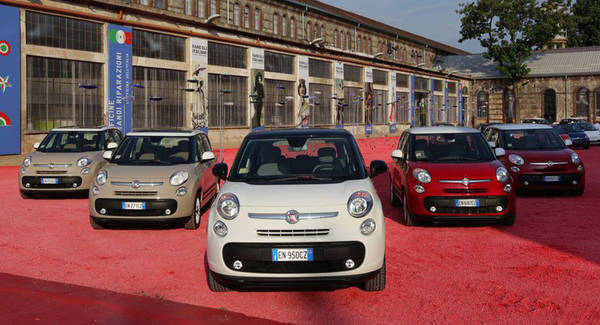 One more terrible month for Italian car market. In November 2012 the market fell 20.1%, which is as bad as the months before October, when the fall slowed down (-12.4%). One year ago the market fell 9.3% compared to November 2010, but two years ago, in November 2010, the market had a deeper fall (-21.1%). All those numbers explain the hard moment of Italian auto industry and the difficult coming months. However analysts have said that the fall should stop in 2013, and the recovery should come in 2014. Now Italy is Europe’s fourth largest market far behind its eternal rival, France. In that scenario Fiat Group maintained its market share thanks to some specific models. The whole group plus Jeep managed to rise its market share from 28.49% on Nov/11 up to 29.74% last month. This is particularly good news in current situation. Fiat Group sells fewer cars now but is catching share from other auto makers, which are doing worse than the Italians. Nevertheless the ‘good’ fact is explained by only one brand of the group, Fiat, which is down ‘only’ 14%, far from total market’s fall, farther than the other brands of the group, and even much farther than competitors from Germany and France. That is why Fiat brand occupies a bigger place in the group: last year its sales counted for 71% of the group’s total. This year its share in the group is up to 73.5%, which is too much, but is explained by the fact that Lancia and Alfa Romeo (the other 2 ‘big’ brands) don’t have a big range of products. This time Alfa Romeo had a big fall and its Giulietta model did not maintain its sales figures as it happened in previous months. Lancia, down 23.4%, is in complicated situation as it is really dependent on Italian market and the new Ypsilon keeps falling more than total market. 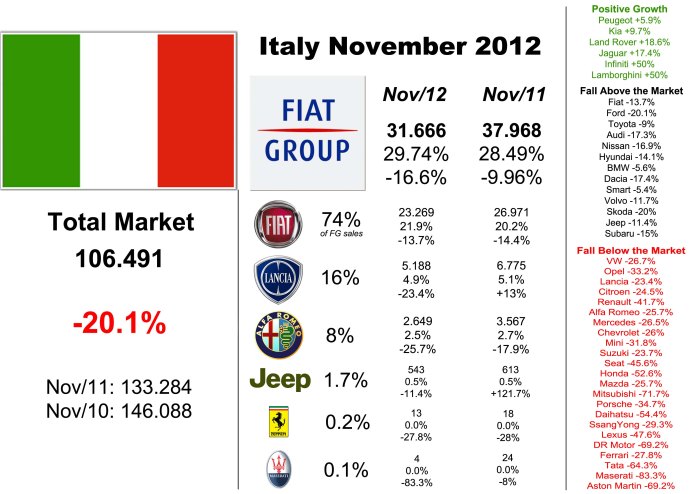 Among mainstream brands Fiat did quite well. Alfa and Lancia continue to fall. Too bad for VW, Renault and Opel. Source: UNRAE, bestsellingcarsblog.net

After Fiat, then comes Ford as the best-selling brand in Italy. It was down a massive 21%. Then comes VW, which for the first time falls more than total market, down a shocking 27% (it is perhaps its worst result in Europe). A worse situation for Opel, Citroen and Renault. The only big brand to have positive results is Peugeot (now ahead of Lancia). Toyota fell 9%, while Kia is up an incredible 10%. So compared to its main rivals Fiat did very well, but Lancia is in a difficult situation, while Alfa Romeo does not that bad considered the fact that it only offers 2 models. There is concern about Lancia, as it can’t reach not even 5% of the market and Italy represents more than 85% of its sales. So, Lancia faces two difficulties: it does not sell as before in a market that continues to fall. Alfa Romeo is somehow in a better situation, as it is not that dependent on Italy. This year will be by far the worst for both brands in the last 2 decades. Going further, Fiat Group’s share increases due to specific models. Fiat models to have positive result were the new Panda (a tiny growth) and the new 500L which could be the protagonist of the month. The new small MPV was Italy’s 10th best-selling car and could be Fiat’s new star in coming months according to what happened in November. More than 2.000 units were sold that month. That’s a result that can be analyzed from two points of view. 2 thousand units for an all-new model in its third month of life is nothing. But if current situation is taken into account, then the 500L is a complete success. It can be also a kind of savior of Fiat Punto as its gets old while the 500L is a B-MPV that can perfectly fit the needs of those looking for a subcompact. In the opposite side the 500 had a big fall, even worse than Punto. Lancia sold almost 3.100 Ypsilon, down a massive 37%, which is a lot. The Musa, which should be out of production soon, increased its registrations 54%. Finally the Giulietta, which used to be in top 10, now occupies place 14th with almost 1.800 units, down 26%. It was the deepest fall among Alfa Romeo models.

The Panda is the only important model to grow in November. The 500 had a terrible month. The Punto continues to fall and is extremely close to Ford Fiesta’s registrations. Too bad for the Ypsilon. The Giulietta falls but not as much as all of its competitors. Source: UNRAE, bestsellingcarsblog.net 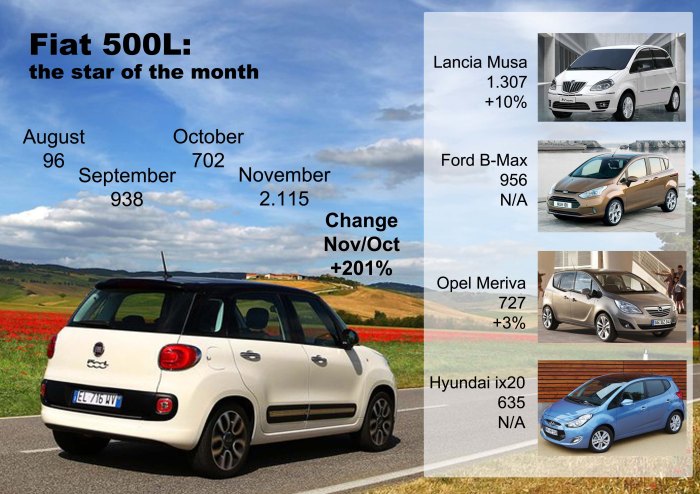 The 500L was Fiat Group’s 5th best-selling car in Italy. It is the leader of the segment. Good month for the Musa and B-Max. Source: UNRAE 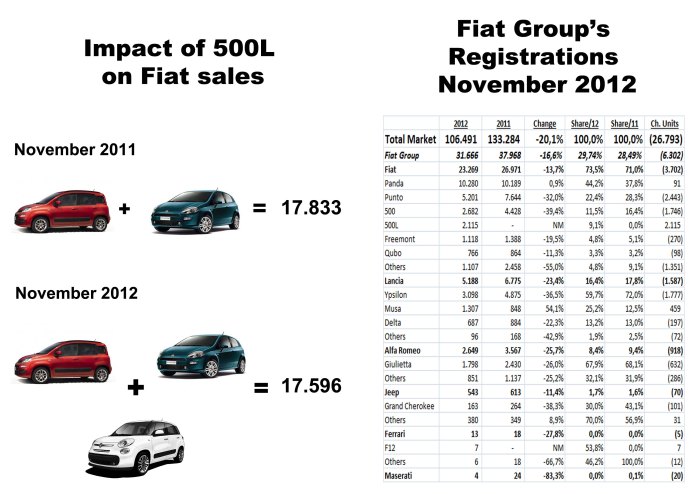