Last Friday was International Women’s Day. Most women in the world were waiting for a gift or the best wishes as it is the way it is celebrated in most western world. But Italian women received a very peculiar message when they saw Fiat’s gift for them. On Friday Fiat Italy decided to celebrate women’s day by offering them parking sensor kit included in final price in all Fiat models. It may had been a nice idea, but the fact of putting those two things together, became a big image problem for the company. Actually when I first heard about it I thought it was a joke but then I realized it was an official message in all social networks. I must recognize that I laughed at the beginning, but then I saw how a bad message can ruin the image of a company. Fiat is the absolute leader in Italy, but its image has been severely affected in the last 10 years. Italians don’t see Fiat as the leading car maker anymore. Lot of them moved to other brands, and their opinion about Fiat is not the best. I say this based on my conversations with Italians (in Turin), on what I read in automotive forums, and so on. That’s why Fiat guys should work harder to get the trust back, and what they did on friday isn’t certainly part of that. Wouldn’t it have had more impact in terms of brand image, to place some people wearing Fiat stamped clothes in the streets and give flowers to women? yes, it doesn’t boost sales, but it can help the brand to better position its image among Italians. Anyway, the idea wasn’t bad, but the way they communicated it was terrible. 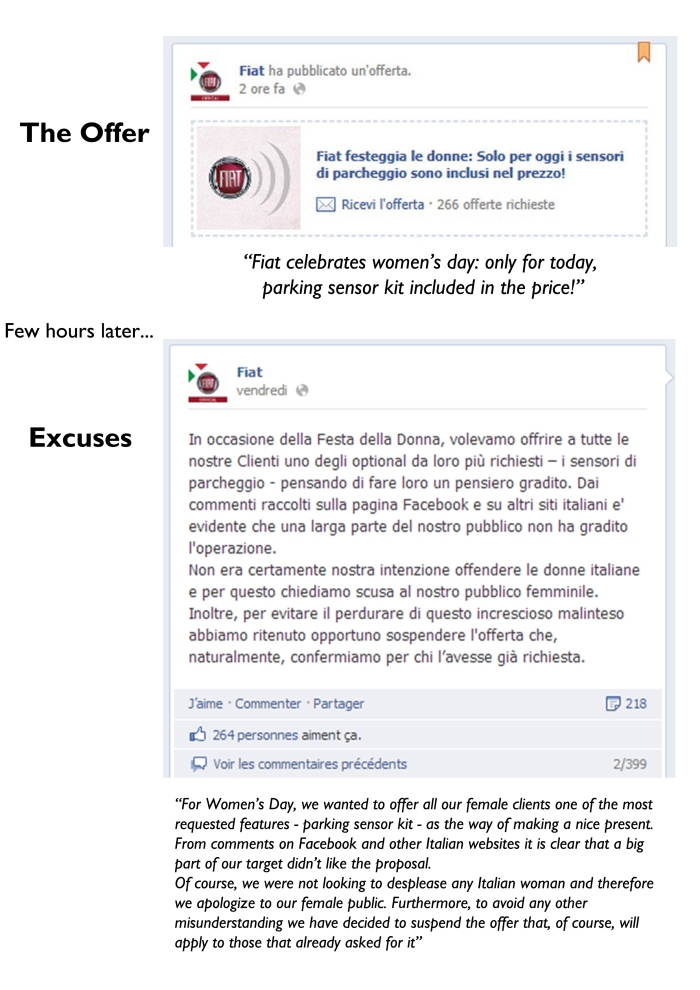 2 hours after the offer was published, there were 266 purchases. However, some hours later they had to apologize for the misunderstanding and there were 399 comments in Facebook. If Fiat wanted to generate controversy, they certainly did, but at the end there were more bad than good things.

4 thoughts on “When women hated Fiat”