Poland could be considered one of Fiat’s most important markets in Europe if the analysis is based on market share. If minor markets are excluded, Poland would occupy place # 4 in Europe, after Italy, Greece and Turkey. The strong position of the group in this medium size car market is explained by several years of presence through local production. Fiat brand is perhaps the first to open a factory to satisfy local demand. However, as it has happened in many other countries, the group has lost market share during the last years and nowadays it is not as powerful as it used to be. In 2012 Fiat-Chrysler  sold 25.554 units, which is 8,2% share, much higher than Spanish, French, British or German ones. But when that result is compared to previous years, then the position of the group is deteriorating very quickly. Last year Polish car market (LCV included) was down 2,5%, but Fiat-Chrysler registrations dropped 14,5%. In 2007, the group (without Chrysler Group) owned 10,9% of this market and Fiat was the best-selling brand.

This country was one of the few European mid size car markets not to have a big fall in 2012. Poland didn’t feel the Euro crisis as some of its partners from the South or even Germany. Good macroeconomic indicators have helped Poland to be in a good shape during these tough times. However it is not immune and Polish began to see some signs of slowdown as their country depends a lot on its European partners. In 2012 the car industry fell only 2,5% to 312.000 cars, so it is between Austria and Sweden in European ranking. In terms of growth, Polish car market did much better than Southern Europe, Germany, the Netherlands, Sweden and Finland. But is behind the good performance of the UK, Denmark and Czech Republic. Part of this stability is due to the fact that Poland has become an important FDI destiny with export focus. That’s how the country is very strong with small car exports and components, but as it depends on Western European markets, its volume exported has shortened dramatically. Besides, the market seems to have reached its top volume (despite it is the 6th most populated country in the EU), as it is allowed the import of used vehicles.

Polish car market could be considered a stable one compared to its partners from the EU. In fact total registrations fell only 5% compared to 2007 figures. The market reached its top in 2008 with 374.000. Poland is also a strong supplier base for car components. In terms of volume/population, Poland is very far from Western EU markets and even from similar economies like Czech Rep. or Slovenia. Source: Carmarket.com.pl, Ernst & Young

As usual, the market is dominated by VW Group, which continues to rise its share and now owns 21,6% of it. This group is mainly represented by Skoda (the best-selling brand) and VW brand. Its share jumped 1,62 bp thanks to VW brand and Audi (VW is a local producer of LCV only). The german group is ahead of second place doubling its sales: GM, Hyundai, PSA, Renault and Fiat are close between 8% and 10% share. So there is a clear winner but there are some candidates for the second place. So far, last year GM (because of Chevrolet +37%)  became Polish second best-selling car group and surpassed PSA, down 8%. Among the big groups, Ford had the worst fall, down 27%, followed by Fiat-Chrysler, down to 6th place (in 2011 it occupied 4th place). Once again, Hyundai Motor had the best performance, up 14% and gaining 1,43 bp. Contrary to Western Europe, premium brands are still far from top positions as Daimler occupied 10th place, and BMW Group ranked 12th, up a massive 25%.

Even if Fiat was the third best-selling brand, the whole group lost 2 positions compared to 2011 ranking. Along with Ford, Fiat-Chrysler had the worst fall among big car makers. VW and Hyundai continue to grow. Iveco’s figures are not included in Fiat-Chrysler sales. Source: carmarket.com.pl

In terms of segmentation, Poland follows European trend: C-Segment dominate closely followed by B-Segment. Then Polish prefer to buy SUVs, which have a bigger market share than in Germany, France or the UK. In the opposite side, city cars are not popular at all counting only for 5,6% of total sales. But last year Sporty cars did the best in terms of growth. They are up 22% but they don’t count for much in total market. SUV segment is the one with the highest potential so far: in 2012 sales of this kind of cars grew 16%. All types of SUV had jumps. Polish are moving into this kind of vehicles and they are leaving behind the B and C common cars, even if they still command the market. Actually the compact and urban cars (C and B segments) fell 8% and 5%. Finally MPVs were also hit by the rise of SUVs. Small MPV were down 17%.

Poland is another market where SUVs advance. Even city cars, as in the UK, had a good performance. Contrary to B and C segments, which fell. Source: FGW Data Basis, carmarket.com.pl 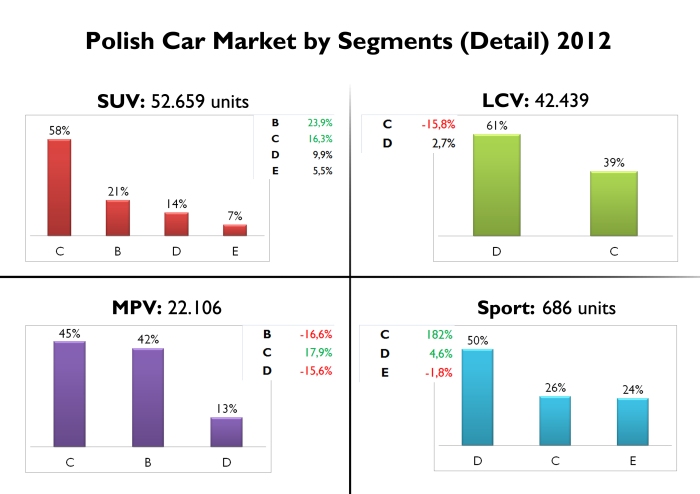 Regarding SUV, Polish prefer the compact ones, up 24%. In the case of MPV, sales are quite divided into B and C segment, but only C ones had a good performance. Source: FGW Data Basis, carmarket.com.pl

The situation of the group is not good at all. It stopped being the best-selling car group from some years ago and last year it occupied place # 6th behind Hyundai and Renault, which don’t produce locally. Fiat is the largest car producer in Poland thanks to the successful Fiat 500 and Panda. However Fiat stopped producing the Panda in December 2012 (they moved the production to Pomigliano, Italy) and replaced it with the Lancia Ypsilon. This change and European car industry crisis made Fiat to produce 65% of its capacity in its Tychy plant in 2012 (they also produce the Ford Ka)*. Moving the production site of the Panda wasn’t a wise move as it is having bad consequences in Fiat’s sales in Poland. Many things must be considered: the first one is that the group’s sales depend a lot on Fiat brand registrations (87%). Second, Fiat brand is not doing the right thing to boost its sales: even if it is produced there, the 500 is not popular at all in Poland. The Panda, the best-selling model of the group in Poland, comes now from Italy and therefore its price may be higher and there won’t be as much sales as when the second generation was available. Besides, the new Polish Ypsilon is not popular in Poland. In total, Fiat seems to be doing the opposite to boost its sales in the important Poland.

The group’s fall is due to Fiat brand fall, which is now the third best-selling brand in Poland (some years ago was the first). The arrival of new Lancias and Jeep brand helped the group to enlarge its range of products and slow down total fall. Jeep sold more than 1000 units, which is very good. Lancia has had a big jump since 2007 but its numbers are still marginal. Source: FGW Data Basis, Carmarket.com.pl

The group sells a lot of LCVs, followed by A and B-Segment cars. These 3 segments count for 82% of total sales. SUVs count for 6,2%, just behind C-segment cars that surprisingly have a good result in Poland. Actually the Bravo did a very good job, with more than 1.000 units sold and ahead of the 500 (it happens only there). The position of the group within each segment is not bad. Of course it leads in A-Segment where the group controls 39% of it. In LCV the Ducato makes a good job and that’s how the group controls 21%. Good aswell in B-Segment with 8,5% (much better than in any other major European market). In SUV there is still a long way: only 3%. As this is the fastest growing segment, Fiat and Chrysler should work faster to catch a better part of it. Too bad for D and Pickup segments where the 159 had it final days, and the Strada is not the type of pickup Polish prefer. 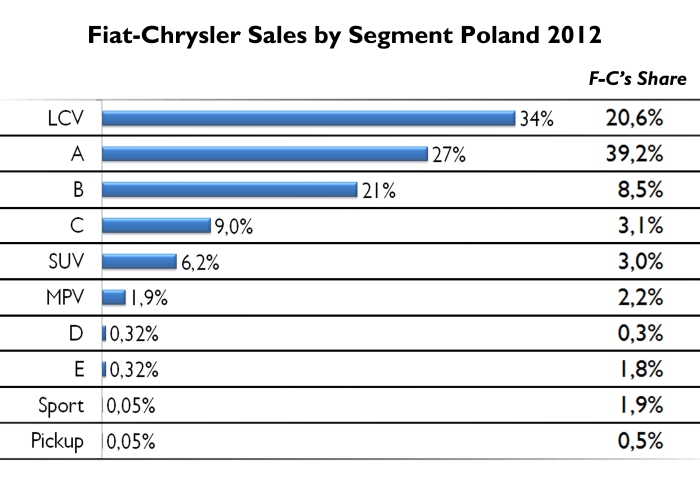 This figure shows the group’s sales by segments (left) and the share it has in each segment. In 2012 34% of Fiat-Chrysler sales corresponded to LCV. The group controls 20,6% of that segment. Notice that total market prefers B and C segment cars and these segments occupy place #3 and 4 in Fiat’s sales. Source: FGW Data Basis, carmarket.com.pl

Fiat produced the second generation Panda in Tychy till December 2012. This was the group’s best-selling nameplate and even if the new generation was introduced in 2012, it is my belief that most of the units sold last year correspond to the old generation. The reason for this is because the old one was quite popular because of its maintenance costs and also because it was made locally (which means that was the car for several people working in Fiat Tychy). Last year wasn’t good for this nameplate taking into account that the new generation should had boosted its sales. In total, its sales were down 16% in a segment which was up 9%. Contrary to the Panda, the Ducato did quite well, up 17% and became the second best-selling product ahead of the Punto, which had a terrible year, down 34%. The Panda and Punto’s fall explain the group’s bad result last year. Other models to perform bad were the Bravo, Sedici and MiTo. The Giulietta, Grand Cherokee, and Ypsilon had great results. 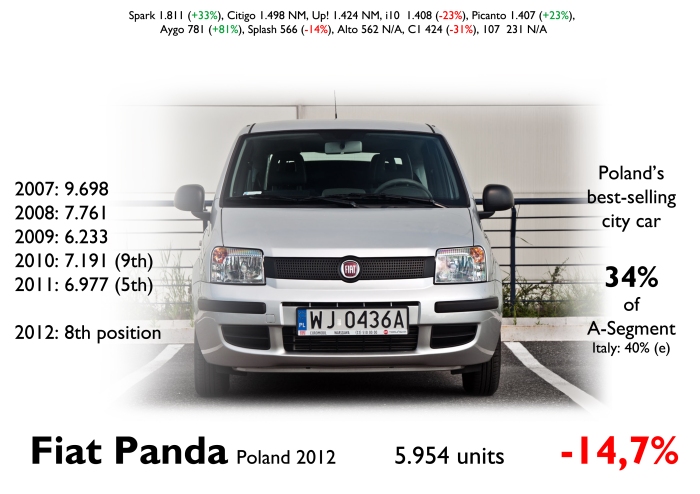 Even if the new generation is available since last year, most of Panda’s registrations in Poland correspond to the locally made second generation. Its sales have dropped continuously since 2007, but it is still the best-selling city car counting for a big part of its segment. VW Group had a good start with its Citigo and Up! both in 2nd and 3rd place. Photo by: Auto Kult. Source: FGW Data Basis, carmarket.com.pl, Best Selling Cars Blog 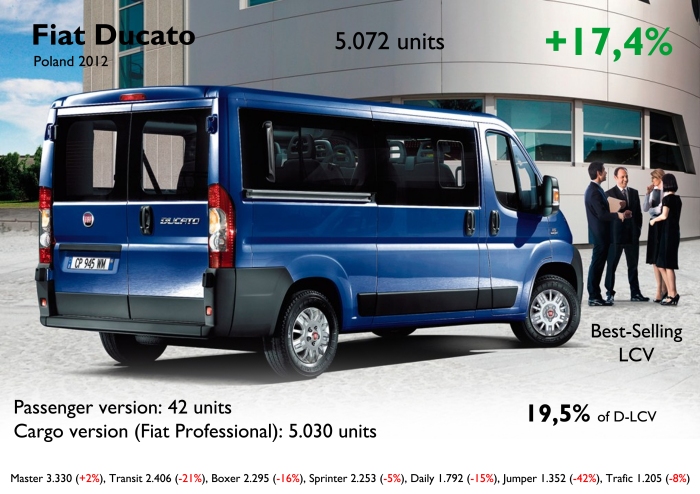 Just as it happened in Germany, the Ducato became Fiat’s second best-selling car and was the leader of its segment. Most of them are for commercial use. The whole segment (D-LCV) is up only 2,7%, and the Ducato was one of the few to increase its sales. Source: FGW Data Basis, carmarket.com.pl, Best Selling Cars Blog

The Punto lost big market share in 2012. Now it is not among the best-selling cars in Poland and competition from Chevrolet and Toyota had a big impact on its sales. Is not usual to see a VW so down in the ranking. Photo by: se.pl. Source: FGW Data Basis, carmarket.com.pl, Best Selling Cars Blog

The Panda is the model with the best share within its segment: 34%. Then comes the Ducato which controls 19,5%. Third position is surprisingly occupied by the Jeep Grand Cherokee, which had a great year and now controls 15% of its segment. The Freemont did also very good with 12% of D-MPV. The Delta, Ypsilon, Linea and MiTo had very low shares. The group needs a new C-SUV as soon as possible, as the Compass/Patriot are far away from the leaders (they have 1,1%) in a segment that is now Poland’s third largest. The same happens for D-Segment as the Alfa 159 said goodbye and there isn’t any immediate successor (this segment counted for almost 10% of the market and the Alfa got 0,3% share). 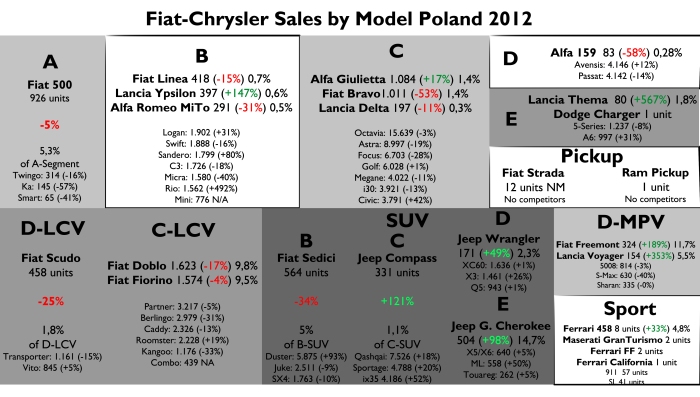