One of Dodge’s main characteristics is its ability to create muscle cars. That’s the identity Chrysler wants to promote among the big public and the Charger is the best example of it. It was introduced in February 2005  for the 2006 model year, the Charger is then a pretty old car that continues to give interesting results to Chrysler Group. Last year Dodge sold around 95.000 units of this muscle sedan all over the world. It is not a bad result taking into account that it is a pure American car with more than 7 years on the market. Obviously, this car is mainly sold in USA (82% of its sales), but it can be found in the Middle East and even in Switzerland where it is still available for purchase. It means that most of the analysis must be done from the US point of view: in 2012 it was up 18%, but it hasn’t reached pre-crisis levels, when Dodge sold almost 120.000 units only in USA in 2007.

Even if it didn’t cross the 100.000 units sales barrier, the Charger is a very important product for Chrysler Group as it control a very good share in world’s largest E-Segment, USA. Source: FGW Data Basis, Best Selling Cars Blog

5 year later the model is less popular in its home country but is ‘more international’. Except for Canada, the Charger had great jumps in all countries where I collected data. Even if they are not big numbers, this Dodge increased its sales by 595% in Switzerland, at the heart of a continent where the brand doesn’t exist anymore. In the Middle East, Oman was the country with the lowest increase: 91%. Contrary to what anyone could think, the Charger manages to catch an important share in E-Segment in almost all the markets where it is available. It controls more than 9% in 5 markets, and in Kuwait it got its best: 19% of E-Segment, and 15th best-selling car. This Dodge is also available in Mexico and Chile, but this information is not available. 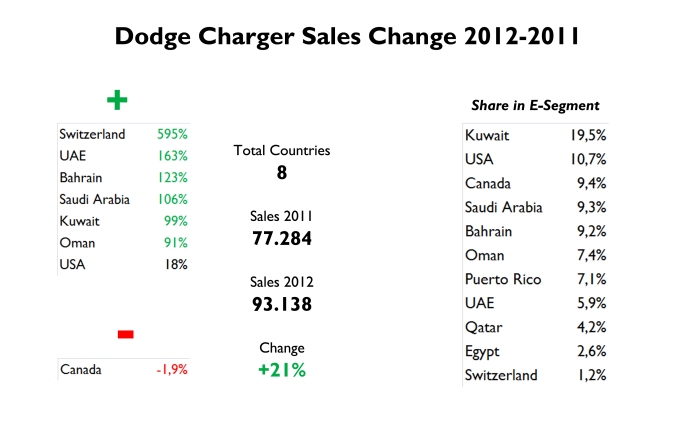 Good jump in almost all countries evaluated. Notice that the Charger is more popular (in terms of share) in Kuwait than in USA (it was the 15th best-selling car of that market). Is hard that an American car has that popularity outside USA. Source: FGW Data Basis, Best Selling Cars Blog

Dodge should consider its successor as soon as possible. Yes, the car is still popular, but this won’t last forever, and they shouldn’t risk the good position of this big sedan by delaying the arrival of new generation. The Charger is a key product for the expansion of Dodge brand in the Middle East, thus decrease the dependence of this brand on American market. Rumors have said that a new Baracuda would replace the Charger, but nothing is confirmed yet.

The Charger is more than half of the group sales in E-Segment. Source: FGW Data Basis, Best Selling Cars Blog