It is one of the first Western car makers to sell its cars in India and now is one of last in the ranking. This story is not unusual with Fiat. They were successful in the beginning thanks to the Fiat 1100 Delight, which is still part of the landscape as a taxi in main cities. Decades later, the situation is different. In 2012 Fiat sales dropped dramatically to 11.000 units from 17.000 units in 2011. It means that last year’s results are half the 2009’s figures, when Fiat had its best year so far. The bad result contrasts with the good momentum of Indian market, up 9%, but still slow compared to other emerging markets. The whole group is represented by only two models, both produced in Ranjangaon, India, so its influence is really low as both models, the Punto and Linea, belong to the same segment. Thus, India is along with China and Russia the remaining big market where Fiat-Chrysler must work hard and quick in order to have a bigger market share.

This country is now world’s 6th largest car market ahead of all European markets (except for Germany), but is expected to be part of the podium in the next decade, as it is the second largest population and car industry hasn’t taken off yet. A total of 2,65 million new vehicles were delivered last year, which is a new record, and explains how car sales continue to grow continuously. Compared to 2007 figures, the market is up a massive 76%, or almost 1,2 million units more. This is pretty the same quantity the Italian market fell in the same period. Indians continue to buy new cars and some of them have decided to stop using their motorcycle to get a new car. The first consequence of this explosive growth is the boom of small cars, which are the entry-level options for many people. It is why last year 73% of total sales corresponded to A and B segments, leaving behind Brazil as the largest market for this kind of cars. A-segment is world’s second largest (in terms of volume) after the kei-cars in Japan. Government’s policies and lower taxes on vehicles shorter than 4 meters is another factor that explains this big concentration. 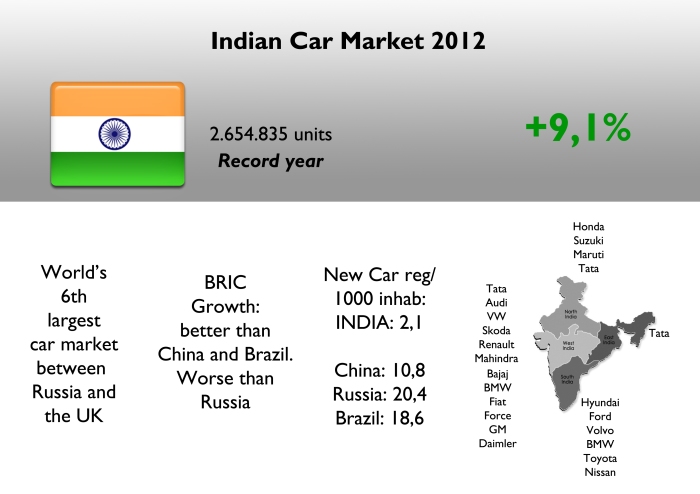 Another record year for Indian car market. However it is still far away from its potential and is even far away from other big emerging economies. If India had the same proportion new cars sold/1000 inhabitants of China, then its sales should be around 13,6 million units. If USA indicator is applied, then more than 57 million cars would be sold only in India. Notice the big number of car makers stablished in all parts of the country. Source: Best Selling Cars Blog, Wikipedia, All About B2B

India is a very closed market so it is difficult to find a big range of brands and options. Imported cars are highly taxed and in some cases a 75% duty is applied to some fully-built cars (above $40.000). However India is in talks with the EU to sign a FTA that is supposed not to include car industry, despite European pressures to do it. In case cars are included, the maximum tax would be 50%*, which is still a lot. This restriction is part of government’s goal of taking automotive industry (motorcycles included) as one of the country’s largest contributor to Gross Domestic Product (GDP). In fact in its Automotive Mission Plan 2006-2016, India wants this sector to double its contribution to GDP  by taking the turnover to $145 billion in 2016**. Car industry counts for 4% of total FDI, according to Ministry of Commerce. It is big, but the government wants to be giant and it is working on it: it wants to boost fuel-efficiency cars, electric ones (they want the market to sold 5-7 million electric cars sold by 2020). All major car makers are pointing at these goals by increasing their investment, presence and R&D (see figure). Meanwhile the market is very concentrated as it showed last years figures by group: Maruti (Suzuki’s joint venture) controls 40% selling more than 1 million units. It would position this brand as the only one to overpass the 1 million unit barrier in one single market (after the best-selling brands in USA, China, and Toyota in Japan). The following groups are mostly Indians, with Hyundai in an impressive second place. All groups in the ranking have production plants in India.

Maruti-Suzuki is the absolute leader of the market. Despite the big investments coming from Hyundai, Tata and Mahindra, the guys from Maruti are always ahead of competition with a wide range of products, most of them city cars. Renault and Mahindra were the best performers thanks to their SUVs. American brands continue to lose market share. Source: FGW Data Basis, Best Selling Cars Blog

Indians prefer B and A segment cars as most of them don’t have enough money for larger cars. But it is not only a matter of money. Traffic is extremely rude so most of the drivers don’t really care about the car itself but about getting from point A to B. Technologic features aren’t part of Indians mind when they think of buying a car. Of course this is changing and as long as life conditions improve (in terms of income and roads), future drivers will change and start looking at the better cars. In 2012, city cars lost its pole position as the best-selling segment. It was overpass by B-segment cars, which now count for 37% of total market. However, A-Segment cars are not far with 35% of it. A big part of this 2 segments’ sales come from sub 4-metre mould, as a response to government’s policy of lowering taxes to those vehicles shorter than 4 m. Somehow it works like the kei-cars in Japan. Excise duty is 12%, which is half the one for larger cars. As this rule doesn’t specify the type of car, all car makers are making use of it to develop not only hatchbacks, but 4 door sedans and even SUVs (it explains why a weird car like the Maruti D-Zire exists). If A and B Segments lead the race in terms of volume, SUVs command in terms of growth. Last year SUV demand was up 41%! and the best performers were not the small SUVs but the mid-size ones, D-SUVs, up 92%. Part of recent success of SUV segment is explained by new introductions, but also because most SUVs are powered by diesel, which is subsidized and is cheaper than gasoline. Luxury cars are very rare to see in Indian roads. 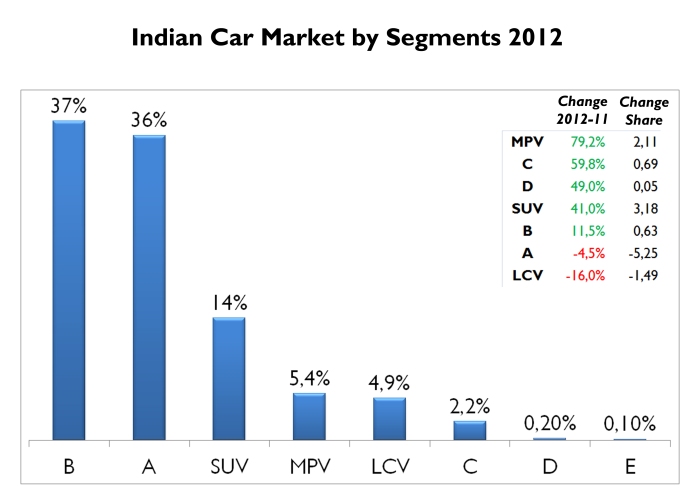 In 2012 B-Segment became larger than A-Segment, which fell 5%, losing 5,3 bp. Even if SUV wasn’t the segment to grow the most, it was the one with the highest advance in terms of share. MPVs were boosted by the arrival of Maruti Ertiga. Source: FGW Data Basis 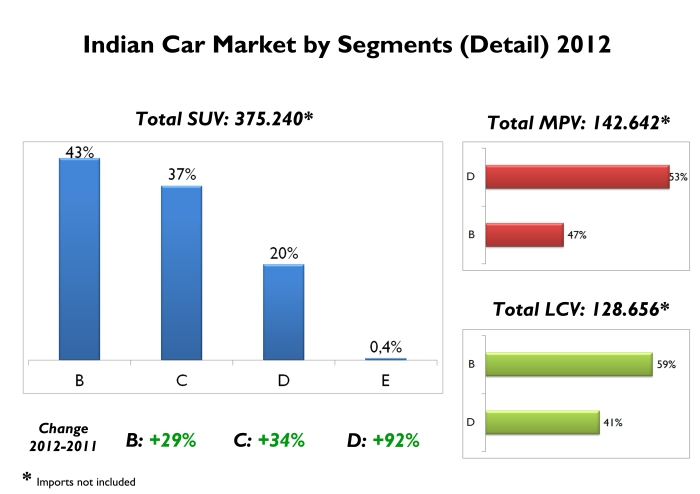 Small SUVs rule thanks to the arrival of the Duster, and the success of so many Mahindras. Mid-size SUV had the best performance even if they are highly taxed. Small MPVs had also a wonderful year mainly because of the success of Maruti Ertiga. Source: FGW Data Basis

After the company decided to cut its distribution agreement with Tata Motors, things are getting hard for Fiat. First of all there is only one brand officially on sale: Fiat (though Ferrari is distributed by Shreyans Group, there is no official data for its sales). The brand doesn’t only produce cars but engines for around 75% of small cars sold in India***. It means the group is more successful selling engines than finished cars as the Punto and Linea together allowed the group to achieve a mere 0,42%, 2 more basis points than China. In total, Fiat sold 11.131 cars, its lowest result since 2008, when Fiat started the production joint-venture with Tata. The agreement also included the distribution using Tata dealerships network all over the country, while Mr. Ratan Tata, the company’s CEO, made part of Fiat’s board from 2006 till 2012. But things didn’t work as expected because it seems that Tata became a direct rival in the selling point, as its cars are cheaper than Fiats. That’s why Fiat decided to split operations and have its own network, starting in April 2013 with 57 dealers.

It was the first foreign auto maker to start operations in India but it is now one of the last in the ranking with only 0,42% market share. Source: Carsitaly.net

Fiat sold 8.545 Puntos and 2.586 Lineas, for B and C segments. None of them are shorter than 4 m, so Fiat can’t access to tax discount on this issue. The Linea controls 4,5% of C-Segment, mainly dominated by Nissan. The Punto, is located in India’s most popular segment and controls only 0,87%. This is very curious: Fiat is known for its small and cheap cars but in the land of small and cheap cars it doesn’t offer anything. How come? Without making a close analysis, I would say that a cheap Panda (second generation for example) or current Fiat Uno would be a success in India. But there may be political/economic reasons for this strange absence of these popular models in India (in the agreement with Tata, Fiat may had been forced to abandon its plans of building the Uno/Panda, as they were direct competitors of Tata Nano).

The Punto had a bad year but compared to previous ones, it has fallen as much as the Linea. India is the 5th largest market for this model between France and the UK. In 2011 its share in B-Segment was 1,3%. Photo by: Autos Blog India. Source: FGW Data Basis, Best Selling Cars Blog 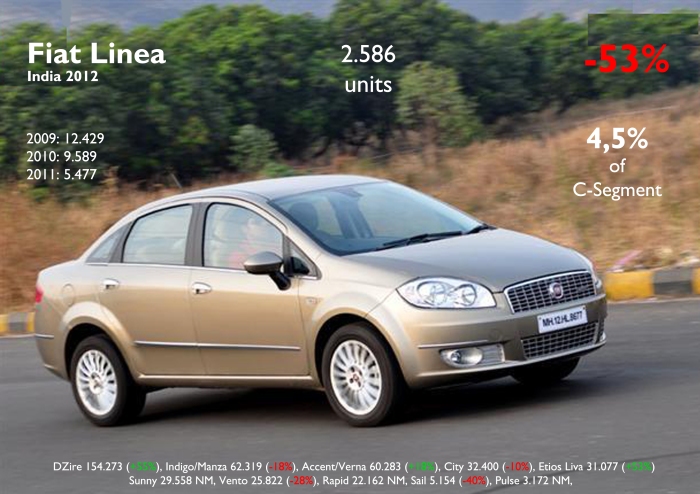 The sales figures of this sedan hasn’t stop falling since its launch. Price and positioning may be affecting its performance. Photo by: Carwale. Source: FGW Data Basis, Best Selling Cars Blog, Carsitaly.net

This is the best chapter of Fiat’s story in India. Fiat has big plans for the coming years (we’ve heard this in China and Russia as well). It will point at the fastest growing segments to boost its sales and rise its market share to 1% by the end of this year, and 5% in the long-term. To achieve that, Fiat operations will rely on 112 dealerships it expects to have at the end of 2013. Besides it will continue to build engines for Tata and Maruti. Regarding product strategy, Fiat is not considering any further small cars in short-term. Contrary to what some car websites said (including this blog) about a possible arrival of the new Panda, Fiat will only work on improving its existing Linea and Punto, giving them a higher ground and resistance to tough Indian roads. The good thing will come from Jeep, which will be introduced in 2013 with the Wrangler and Cherokee (the new one?) and later, in 2015, it plans to begin local production of the very first B-SUV of that brand. It is expected that this new SUV will use the same base of the mini SUV Fiat is working on to build in Mirafiori plant. The market shows that consumers continue to buy small cars and some of them are moving to SUV (small, mid and large). Analysts expect Indian market to fall this year due to increased ownership costs and an economic slowdown. However SUV segment is not expected to fall, despite the government’s recent decision of increasing taxes to this kind of cars as they “occupy greater road and parking space”. Fiat could sell around 15.000-20.000 cars this year.