Once again Alfa Romeo faces tough times. Last year the brand barely sold 100.000 units in the whole world, down 29% circa. That’s a very bad result for a brand like Alfa. One year before the brand took a breath with the successful Giulietta, which reached its top in all markets. But the good moment didn’t last for long and soon both models, the MiTo and Giulietta, began to fall in sales rankings. It has been happening in the last years: a great start that doesn’t last for to long. In fact, I think the brand should pay attention to this weird situation and take some measures to try to increase the maturity period of all of its models. The Giulietta is a young product that doesn’t deserve the slump on sales it had last year (a tiny update is expected to arrive late this year).

Alfa Romeo sales were extremely low in 2012 (Porsche sold 114.000 units). The brand counts only for 2,4% of the group’s sales (Audi counts for 16% of VW Group sales). For source see at the bottom of this article

The brand is far from the late 80’s/early 90’s when it sold 144.000 units only in Italy (6% market share). Last year it had to deal with only 2 models, as the 159’s production ended. These are certainly not good times for Alfa Romeo: it faces European car industry crisis with two hatchbacks in the most competitive segments. Hence deliveries dropped practically in all markets where it operates. In Italy, which counts for 42% of the brand’s sales, its registrations fell a massive 28%. It was worse in the rest of Europe except for Austria, Spain, Hungary, Czech Republic, and Poland. Sales didn’t change in Lithuania and Bulgaria, and increased in Turkey, Estonia, Latvia and Russia. All these countries (Europe + Turkey and Russia) counted for 91% of total sales. That’s too bad as we all know that Europe is not facing its best economic period.

Even if Alfa is more international than Lancia, Italy still counts for a big part of its sales. USA should help to balance its registrations. Notice how Japan became an important market for the brand jumping from 10th position in 2011 to 5th in 2012. For source see at the bottom of this article

The remaining part of the sales come mostly from Japan, which became the 5th largest market for the brand, ahead of Spain, Belgium and the Netherlands. Actually, it was the market with the highest positive change in volume due to the introduction of the Giulietta which was very well received by Japanese consumers. Other non-European markets include South Africa, Australia and Israel. The brand is very rare to see in Latinamerican roads because of high prices and low awareness. 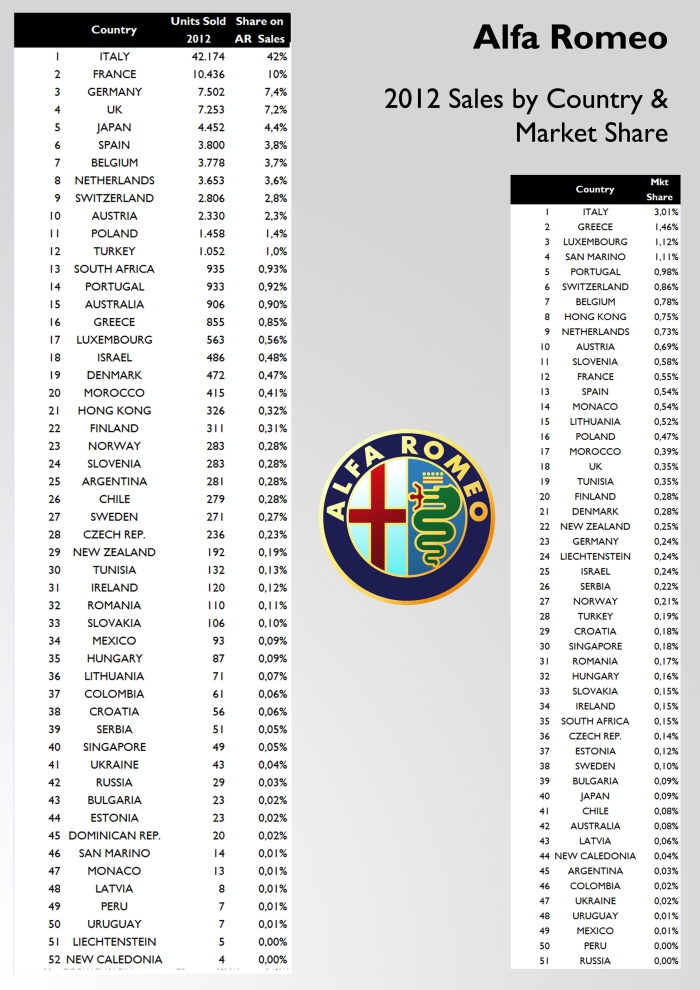 Ranking by volume doesn’t correspond to the ranking by market share. The brand is somehow still visible in some small European markets. Generally speaking, Alfa Romeo has a very low sales penetration in all markets (Italy included). For source see at the bottom of this article

The brand’s advance took place mainly in those markets where it is in the introduction phase, so normally sales grow dramatically. The first column shows the variation of total market, and the second one the variation of AR sales in that market. For source see at the bottom of this article

This year the brand’s registrations are expected to fall again to shocking levels. Alfa Romeo may sell around 70.000 units, which is extremely bad. This result is based on a poor current range, and the bad European situation. However things may get better in the second semester as it is expected tiny updates for the MiTo (in the summer) and the Giulietta (late this year). The 4C won’t have a big impact as it is a low volume model and it won’t be available until September. At this point, even if I am optimistic about the brand’s goal of selling 300.000 units by 2016, it seems hard for Alfa Romeo to increase its registrations without any other volume model. In 2014 they may introduce the Spider in collaboration with Mazda, but once again it is not a massive product. The models to make the difference won’t come until 2015: the Giulia and C-SUV. In other words, Alfa Romeo needs to work quickly and anticipate those launches.

Europe still concentrates the biggest part of Alfa Romeo sales. In Asia, things went better thanks to Japan and the Giulietta. A very low share in South America where these cars are very expensive. For source see at the bottom of this article