It sold only 6.159 units (6.288 shipments), but the trading profit margin wasn’t that small: 6,6%. This brand is Fiat-Chrysler’s rough diamond, as it sells low numbers but its potential is really big. Hence, the brand just presented the Ghibli, its first E-Segment sedan, and one of the first models to help Maserati to sell 50.000 units by 2015. Last year total sales increased 2% mainly because of US, Chinese and Japanese markets where the brand did quite good. In the opposite side, European registrations fell 30% due to deep falls in Italy, Germany and the UK. The Middle East was another region with good results (+37%). In other words, Maserati is one of the few luxury brands to suffer European crisis, but resists thanks to USA good performance. 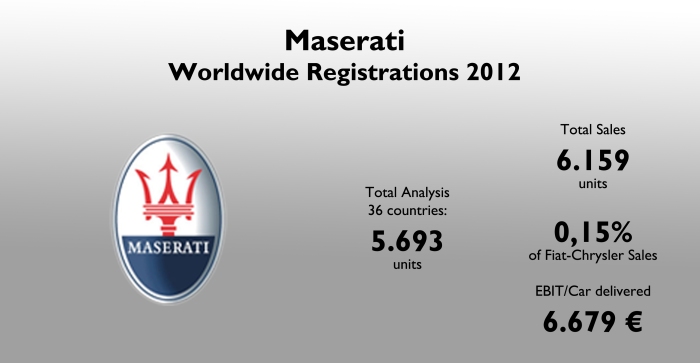 Total sales are up 2% but it is still a very profitable brand with almost 7 thousand euros per unit sold. Source: see the bottom of this post

Italy, that used to be one of the most important markets, occupies the 4th position in Europe and the 9th in the ranking. That’s too bad and reflects the big crisis car industry is facing in this country. China became the second largest market ahead of Japan, but it is still a very unknown brand with almost 1 thousand units sold (against 200.000 units that sold Mercedes-Benz in that country). This makes of Maserati one of the few brands of Fiat Group with the lowest dependence on the European market. In conclusion, to increase total sales when global economy isn’t facing the best times, and current range was a bit old (the new Quattroporte was officially introduced in 2013), means that it is a brand with an enormous possibility to succeed with its future plans. The brand wants to sell 13.000 units of the new Quattroporte this year plus the regular sales for the GranTurismo and GranCabrio. The Ghibli should make its part at the end of this year, so total sales, according to Maserati, should reach 17.000 units circa. I think the Quattroporte’s target is a bit exaggerated taking into account its price and competition (the new Mercedes S-Class is right in the corner). It’s true that Chinese are buying more and more luxury cars, and the position of the brand in the Middle East continues to impress. US market is also a good place for this kind of cars, but to more than double total brand sales with only one model may be too much. Maserati may sell 10.000 units this year to properly take off in 2014 with the Ghibli.

US market counts for almost one half of Maserati’s total sales. China follows, and then comes Japan and the UK. Notice that Italy is in 9th position but this would change if the Middle East countries are included. The brand sold just 15 units in Brazil. For the source see at the bottom of this post

This figure shows the change on sales 2012-2011 in some countries. Sales didn’t go well in most of European countries, but had interesting results in USA, China and Japan. In the second column, you can see the market share of the brand in ‘F’ and ‘E-Sport’ segments combined, as Maserati offered only two models: the Quattroporte (F-Segment) and the GranTurismo/GranCabrio (E-Sport). Source: see at the bottom of this post