The millionaire Chinese decided to destroy his car as a response to bad service from Maserati. China is Maserati’s second most important market and last year it sold around 945 units. China was also the chosen market to unveil the new Ghibli.

Shocking images arrive from China, where an upset owner of a Maserati Quattroporte decided to destroy its beautiful car as the way of complaining about the bad service. Pictures show how 4 guys, who were hired by the Quattroporte’s unhappy owner, destroy the car ‘leaving the vehicle with a shattered windscreen and mirrors, the grille broken and dents to the bodywork‘ according to China Daily Mail Blog. This terrible action took place at the opening of an auto show in Qindao, China, just in front of many people who were shocked about this drastic decision. According to the owner, Maserati didn’t respond to his complains about two problems the car had, and it only replaced a bad spare part with a used one, charging as if it was a new one. Then, ‘it failed to fix a problem with the door and scratched the vehicle’. In the other hand, Maserati said it had responded to the client and considered his reaction to cause sensation. Who ever is right, the truth is that reactions like these can severely damage the image of a brand like Maserati. The fact that a millionaire decides to destroy its beauty car should tell a lot about his way of solving problems, but also about his complains about the quality of his car. Maserati should had avoided this situation, specially now that the brand is focusing on markets like China to increase its global registrations. Chinese market deserves the best service, and the best image. 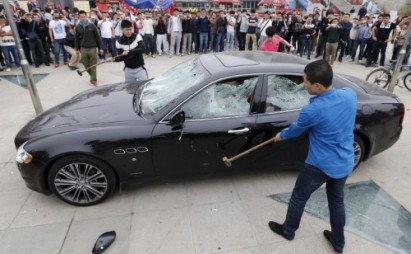 15 thoughts on “Be careful Maserati!”