Even if it barely sold 8.000 units in 2012, Ferrari keeps being the most profitable brand of Fiat group. The goal for 2013 is to decrease the number of registrations but increase profits, with better and more expensive cars. It won’t be hard to achieve it considering the latest models and the big awareness the brand has in the whole world (it ranks 2 in the quantity of fans among car brands). In 2012 the Cavallino brand sold 7.318 units, up 4,5% on 2011, with record trading profits of 350 million euros, up 12% (14,4% margin). It means Ferrari sold more cars with a higher retail price. All these excellent results were possible thanks to Asian, North American, and Middle East markets, as European registrations, and specially those of Italy, had a terrible year. As it happens to Maserati, USA is the largest market for Ferrari, with 1.800 (e) cars, and is followed by Germany, the UK, and China. Italy is far in the ranking with only 248 units, down 56%.

Ferrari counted for only 0,2% of the group’s total sales, but more than 9% of its profits. Source: Fiat-Chrysler Q4 & FY 2012 Results Review

The good performance in Japan, UK, Hong Kong, and Germany allowed the brand to offset the extreme falls in Italy, Belgium, and Australia. Europe (Russia and Turkey included) counted for almost 40% of total sales. Then comes North America (no data for Mexico) with more than 27%; Asia (no information for India) counted for 22% (e) of total sales. My analysis includes data for 41 countries that count for 89% of Ferrari’s total sales. I also evaluated the position of the brand in E-Sport segment, and I found that it is quite popular among the best super cars with 41% share in Czech Republic, or 20% in Brazil. What’s next? as I wrote above, the immediate plans are to reduce the number of vehicles sold in order to maintain the exclusivity of the brand. In 2013 Ferrari introduced LaFerrari, so there are no other big events to come this year.

This chart doesn’t include the Middle East countries, where Ferrari has a strong presence. Even though, Italy is quite below in the ranking, behind 4 European markets. Source: FGW Data Basis 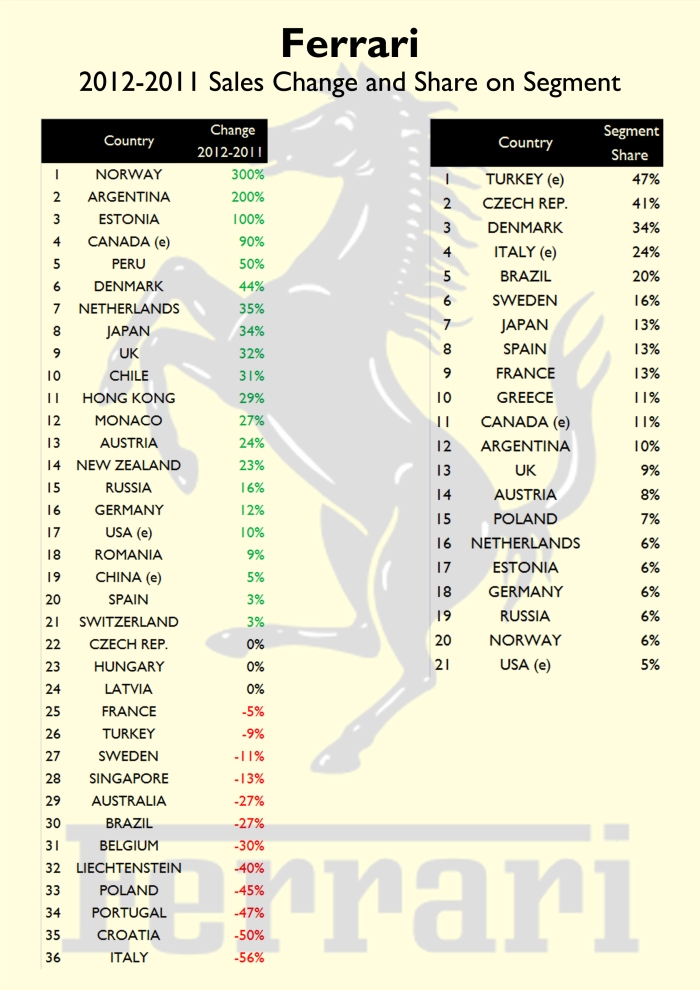 This figure shows the variation in sales in 2012 compared to 2011 figures. The brand had a good year in many markets, but could have done better if it wasn’t because of Italy. The second table shows the share of the brand in E-Sport segment. Ferrari owns a big part of the supersport segment in Turkey, and many countries. Source: FGW Data Basis