Shocking! The first word that comes to my mind the first time I saw the new baby Jeep. The first non-official pictures showed a boxy and weird SUV that reminded me the Jeep Patriot and somehow the Wrangler. But I wasn’t the only surprised with the new Renegade. Many internet users commented on the design and the name of it, and most of the comments I could read were not really positive. This might be because we were waiting for something more soft, more Italian, and suddenly they surprised us with a very tough design, a very Jeep product. That’s perhaps the main attribute of this car: it is a genuine Jeep. It is part of one of the FCA key products for the next years as it is supposed to help Jeep to increase its presence in Europe and in the developing markets. In fact, the group points at very high sales target with the Renegade and Italy will be only the first step, because Brazil and China come afterwards. Pernambuco plant will produce it, while Chinese GAC will do the same for Chinese domestic demand.

The Renegade, named some days before its presentation in Geneva, is part of the global small-car platform that Fiat wants to enlarge from the old Punto up to the 500L and the future 500X. Considering the fast growing demand of B-SUV, FCA decided that Jeep, the most popular SUV brand on earth, needed a small SUV to meet the demand in Europe and the expected one in USA, China and Latin America. This car is expected to be one of the pillars for the future of the brand and its sales target for 2018: 1,9 million units. It was projected in USA following the principles of the brand, but as it is a small car it was decided to be the first Jeep to be produced overseas. That’s how Fiat decided to use its plant in Melfi, Southern Italy, to produce not only the Renegade but the future Fiat 500X, to be presented shortly. Currently Fiat produces the Punto in this factory, but the new mini-SUVs are supposed to replace the production gradually. FCA invested around 1 billion euros to adapt the plant and make of it another pole of the World Class Manufacturing prize, just as it happened with Pomigliano (where the Panda is produced) and Tychy, in Poland. The final result? a real Jeep in a small package. And that’s in my opinion, the good thing about the Renegade: Jeep was able to project a small SUV respecting its roots.

My perception changed when I saw it in Geneva. It looked quite nice in white color while the orange one looked quite big. Anyway even if it is a B-SUV, it is supposed to be positioned between the B and C-SUV segments, not only because of its measures (it is more than 4,3m long) but because of its price range. To better understand the Renegade, its design and positioning in the segment is really important to get to know who the target is. The Renegade client is the one looking for an urban SUV to use it as a real SUV. For him is more important the power of the car and its abilities than the aesthetics. Currently there is no small SUV with the capabilities of a real SUV. They are mostly dynamic and trendy, such as the original Juke, or the beautiful Captur, but at the end, if anyone wants to feel what a real SUV is, it is necessary to move to upper segments. Jeep wants to enlarge its knowledge of making real SUV by launching the Renegade, using the Wrangler’s feeling. They made it with the Renegade. It will be launched in the second half of the year and is expected to reach a peak of 200.000 units during its first full year in the market. Based on Jeep’s talent and Fiat Chrysler expertise on small segments, I’m quite confident that they will do it. 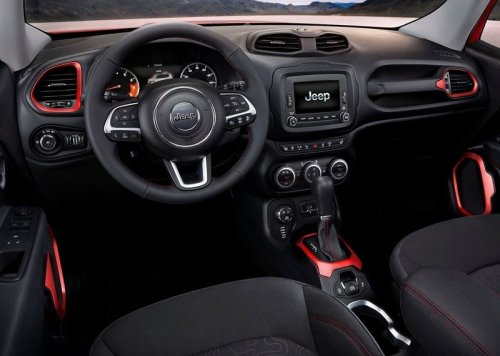 7 thoughts on “Getting to understand the Jeep Renegade”