This is a rendering based on the Fiat Avventura concept and the miniature observed in the slides presented at the Investor day in May 2014. Taken from: icarreview.com

Non-official pictures coming from Indian sites were published showing an updated version of the Fiat Punto. It is more or less what we already saw some months ago when Fiat presented the Avventura concept, a ‘SUV-wanna be’ Punto that was very well commented by the public during those days. The Avventura and the new Punto are part of Fiat strategy to gain more market share in India, right after the terrible results of 2012 and 2013. India is a key market for the future of FCA. The group wants to sell 130.000 units by 2018, up from 25.000 units they estimate to sell this year, and 9.000 they sold last year. The idea is that Fiat brand will sell 100.000 units while Jeep, to be introduced next year will sell the rest, with the introduction of the Avventura this year, the updated versions of the Punto and Linea (already available), and a new model in 2016 while the arrival of the new generation Punto in 2017 with the Grand Siena. Abarth will also make its debut with the 500 and Punto, while Jeep will start selling the imported Wrangler and a local made Grand Cherokee in 2015. By 2018 the group will rely on 220 dealers, up from 100 it had by the end of last year. Yes, it is certainly an ambitious plan, but Indian car market is expected to grow up to 5 million units by 2018, and FCA expects to own only 2,5% of the total. In the first 5 months of this year the brand has sold almost 6.000 units, up a massive 188%. 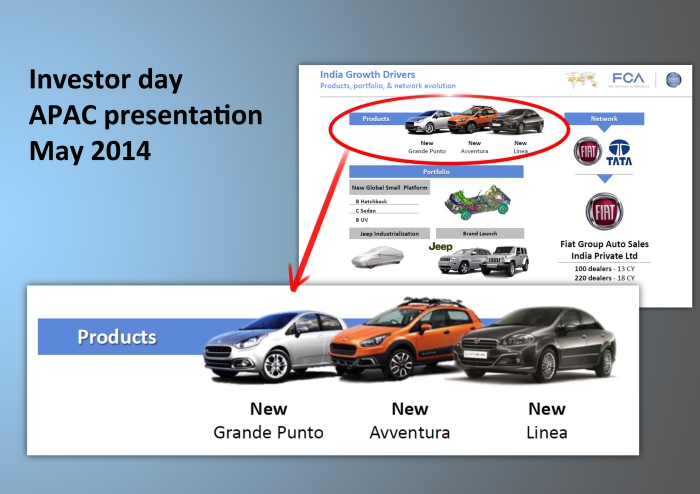 During the Investor day on May 6th, APAC region included a chapter for Indian market and its goals. They showed the current range with a new design for the Punto.

The new Punto was already seen in the Investor day presentation slides. It is a refreshed version of the Grande Punto with a more aggressive front view thanks to the bigger and edgy headlights, updated grill and more visible foglights. The interior and rear view take the same design of the European Punto. There will be new allow wheels and is unclear if it will be powered by new engines. However, it seems it will remain in India only and there may not be posibilities to see it in Europe. Even if the recent results for the Punto are getting worse (in June 2014 it occupied place # 4 in the Italian ranking), the brand seems to be concentrated in other projects, such as the coming 500X and the future 500 5-doors, to be presented in 2016. Therefore the current Punto, just as we know it in Europe, is likely to remain unchanged while the Fiat 500 5-doors arrives. This is also evident by the new priorities at Melfi plant, where the Punto is no longer the start but the Jeep Renegade and Fiat 500X.

9 thoughts on “New Fiat Punto: for India only?”