Global car industry is facing new times. After the big crisis in USA and Europe (which is still under recovering process), and the stagnation in Japan, the world probably heads to a new complicated scenario. The developing economies that allowed many car makers to offset the crisis in the first world are now part of an unstable and unclear situation that alarms all. China, Brazil, Russia, India, South Africa, Turkey, Colombia, Chile, Argentina, and some other developing countries continue to show bad signs in terms of car sales, as some of its governments policies restrict the demand with more taxes. Of course it doesn’t mean that the boom came to an end. More and more citizens leave the poverty and become part of the growing middle class. This means more consumption and a first new car. But the spectacular growth that some analysts predicted in the past should be more flat and slowly. In this new unsafe world all car makers are exposed. However not all of them are equally exposed to the risk, as some are strongly committed to these economies and some others play as foreigners. FCA is somehow strongly exposed as its investments are quite big in Brazil, China, Argentina and Turkey, but it is still a small player in Russia and India.

All the macroeconomics that have a direct impact on car sales had negative trends. Russian economy shows signs of downfall. Source: tradingeconomics.com

The big growth rates remained in the past. Since the end of 2012 the market is completely stagnated and this year it has fallen even more. Current market is at 2011 levels, but production capacity is much higher. Source: Bestsellingcarsblog.com

This year Russian car sales have plunged almost 8% after -5,5% in 2013. The reason for this is not only the political crisis with Western world because of Ukraine, but also the lack of incentives. Russia is now more concentrated on solving the problems with USA and Europe and its position in Ukraine, and that’s why some of the funds for car industry incentives are now going to finance the costs it has to pay in case of economic sanctions. Russia won’t become European largest market in the short-term anymore. Auto makers like Renault, Ford or VW are now facing the problem of over capacity in case the market continues to fall. Maybe they got used to big annual growth rates as it happened in 2010, 2011 and 2012, when total sales jumped from 1,47 million units in 2009 to 2,94 in 2012. In the case of Fiat Chrysler, they are still playing as importers as the deal with Sollers ended up and is not clear which partner will be selected to start local production of Jeeps. Actually, during the FCA Investor day presentation, Jeep didn’t include Russia as a market to host local production in the coming years. Is this crisis going to affect the budget and premium segments as well? Lada’s sales continue to fall: in the last 6 years its market share dropped from 21% to 16%. Nissan, Hyundai-Kia and Renault have stolen some of its share. In the other hand last year Mercedes managed to increase its sales by 19%, BMW 12% and Audi 8%. Land Rover sales jumped 10%; Lexus stable at +0,1%; Jeep +12%; Porsche +5%; Mini +7%; Jaguar +14%; Maserati +146%; with the exception of Volvo, Cadillac, Infiniti, Bentley, Rolls-Royce and Ferrari with negative variation. 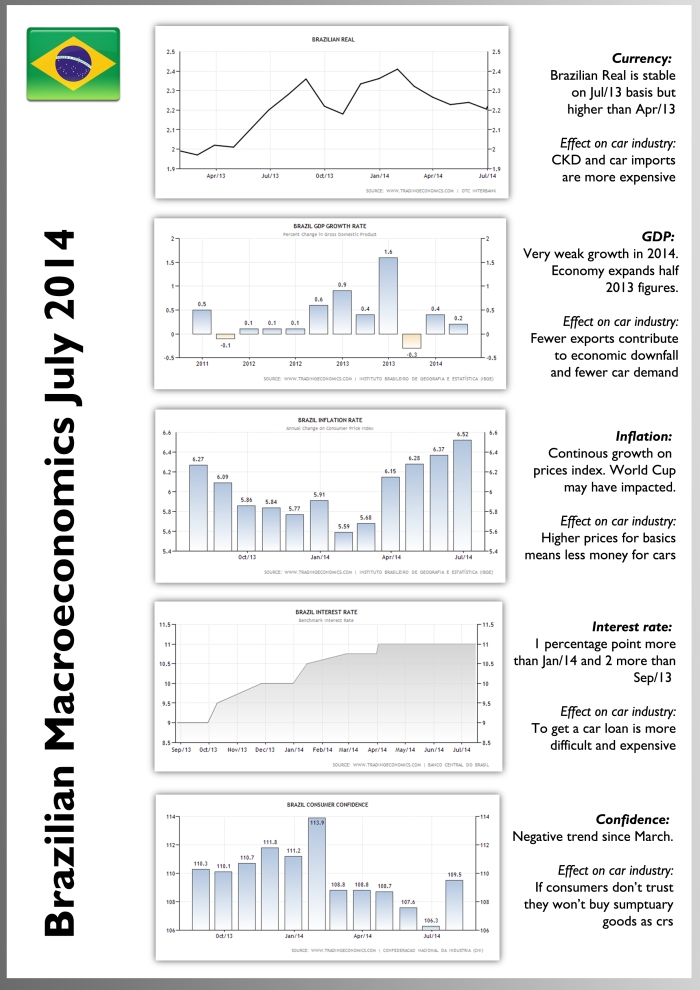 Brazilian economy isn’t in a negative position yet. However its macroeconomic trends show that it may be heading to it. Source: tradingeconomics.com

Brazilian trend is more unstable but the last 14 months have been not that good as before. The market is somehow the same of 2 or 3 years. Source: bestsellingcarsblog.com

Brazil concerns as well. After the government’s decision of stop the IPI tax cuts, car sales have been decreasing since June 2013 till now. This year total market is down 10,2%, after falling 3% last year. What’s behind? the IPI tax is part of the problem, but it isn’t all. The industry is also dealing with Argentinian crisis which is affecting Brazilian exports. According to IHS, the weak demand is also explained by higher prices as a result of mandated standard safety equipment. Credit is also becoming more expensive for the consumers. The inflationary pressures, lower confidence level (consumers are more pessimistic now) and problems with infrastructure have a negative impact on the demand of new cars. Yet, Brazilian car market is still small compared to the population, and if the middle class continues to expand, as it has done in the last 10 years, car demand will continue to grow. That’s why Fiat is building its world’s largest factory in Brazil and is somehow anticipating the SUV boom that is expected to hit the market shortly. However, to increase production capacity may be a risky move considering the last months results and the short-term forecasts. So far Brazil stopped being the cash-flow generator of the group as competition gets tougher and social and macroeconomics indicators deteriorate. The problem is even bigger when including Argentina because even if Fiat is one of the few car divisions to better exploit the current crisis (the Palio and Strada have become top-sellers), the non-sense government policies are ruining the car market. Due to the bad policies Argentina is now far from surpassing the 1-million-units barrier. Overall market fell a shocking 24% and Fiat brand registrations are down a 10%. If these markets get used to incentives and then their governments cut them, it is quite logical that the demand is going to be affected. 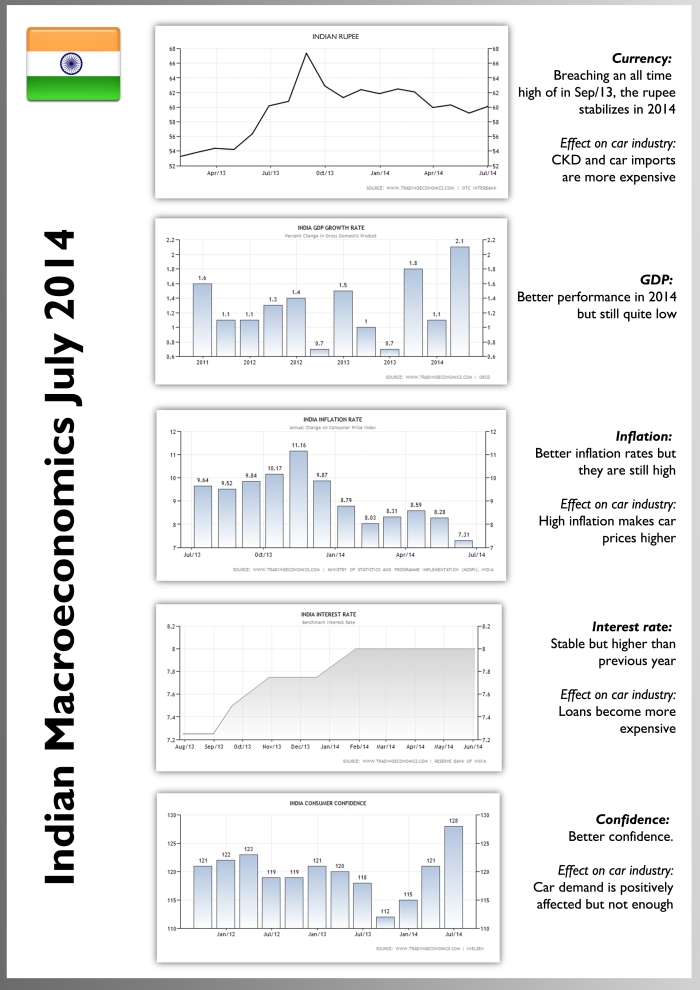 Even if macroeconomic indicators aren’t that bad, Indian economy faces tough times that are reflected on car sales. Source: tradingeconomics.com

The market has the same size of the one of 2011. With the exception of 2012 peak, Indian car sales remain stable and are far away from many forecasts. Source: team-bhp.com

Indian car market seems to be tired. Annual sales seemed to be stagnated at 2,4 – 2,6 million units and this year the market heads to the same results. What was supposed to be the world’s second largest car market at the end of this decade is now more an illusion than a reality. The downfall is explained by higher fuel prices, higher interest rates on car loans, and an emerging secondhand car market. The political situation doesn’t help either as recent elections didn’t contribute to activate the demand. LCV market is also hurt due to lack of mining activities and stalled infrastructure projects. India is taking more time than China to be captivated by cars as macroeconomics indicators show that the largest part of the population is still under poverty lines and the offer continues to be quite small. Suzuki controls more than 40% of the market and that makes of India one of the few markets in the world with such a huge concentration of power from only one car maker. Renault-Nissan, VW, GM, Ford, Honda and Hyundai are all working hard to gain market share but the big base is still small and doesn’t seem to grow in the way they planned when they built their factories. FCA is quite behind with only 2 models but plans to start production of the Punto and Grand Cherokee next year. Actually Jeep’s internationalization plan includes India as one of the 4 new production poles.

Chinese figures indicates that the economy keeps growing but at moderate rates. That’s good but may not be in many car makers plans. Source: tradingeconomics.com

Chinese passenger car demand continues to expand but at lower rates. The market is expected to reach 25 million units this year. Source: Carsitaly.net and tradingeconomics.com

Even if there are no negative variations in Chinese car market, the spectacular double-digit growth seems to come to an end in the coming months. The market heads to another annual record to 25 million units but the passenger cars demand growth decreases. With the exception of February, the other 5 months of this year have experienced an only one-digit positive growth from 5% in June/14 to 9% in April/14. This may be a logical trend after the big jumps the market had during the last years. Simply, it can’t continue to expand that fast. However many car makers point at China’s growth as the core of their future. VW plans to add 2 new factories in Qingdao and Tianjin, as part of a 2 billion euros investment, completing 11 factories all over the country. This is part of the continuous battle with GM and Toyota to overthrown them as the world’s biggest car maker. But the German auto maker is one of the few growing more than overall market. GM expects its China sales to expand 8-10 percent this year, in line with the overall growth of the Chinese market. The American giant wants to invest 9 billion euros in the next 3 years starting with the construction of 5 new plants in 2015. They are getting ready for a bigger Chinese car market. The question is: is it going to be that big? is growth going to be that fast? room for everybody’s ambitious plans? So far FCA has communicated that it intends to sell 850.000 units by 2018, up from 235.000 it expects to sell this year. That’s a big jump but is still low compared to the plans of its rivals.

The situation isn’t better in Turkey, Chile, Colombia and South Africa. Turkey faces political risks and the domestic consumption gets weak as confidence indexes decline. Passenger car market fell 23% in the first half of this year mainly because of weak Turkish Lira against the dollar and euro, which has raised the costs of imported cars. Car loans get more expensive, while taxes grow. Turkey is supposed to become one of Europe’s top 5 markets but as it happens to BRIC countries that’s going to take longer than expected. In Chile and Colombia car sales seemed to reach the peak in the last months. In their cases is not about macroeconomic problems but about the quantity of consumers. Chile isn’t a big country while in Colombia, South America’s second most populated country, seems that the poor population won’t become part of the middle class as fast as expected. South African market is also far from its 2020 goal of 1,2 million cars/year. The country struggles with unstable labor environment, and volatile currency. According to some analysts, the local market is forecast to show minimal growth over the next couple of years, in response to rising interest rates, higher fuel prices, and weakening consumer confidence. Last year all these countries counted for 26% of FCA global sales, with 1,15 million units. If things don’t go as expected, Fiat Chrysler must change its strategy in these markets. Time will tell.

7 thoughts on “Alert: emerging car markets boom to slow down”