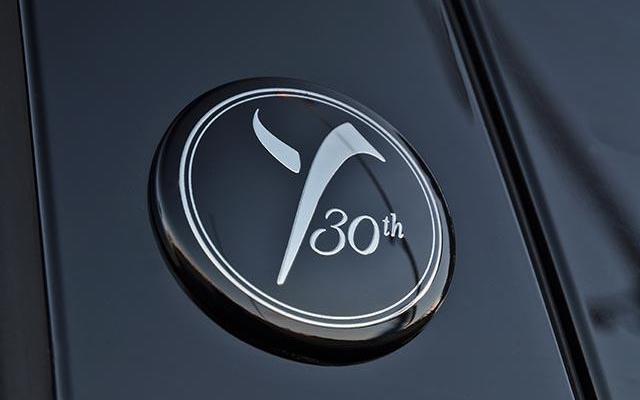 Since its launch the Lancia Ypsilon (or Y, or Y10) has become an important player inside FCA European business unit. The small car, which was born as a 3-door hatch and with its latest generation gained 2 more doors, is along with the Fiat 500 and Panda, the other important city-car of the group in Italy. This Lancia has managed to break into the Italian top 10 best-selling nameplates for years as it is the middle solution for those looking something bigger than the popular Fiat 500 and the subcompact Punto. In 30 years the company has sold more than 2,7 million units in Europe, from which 2 million were delivered in Italy. Does these numbers make of the small Lancia a success? based on the strong dependence on Italian car market, can the Ypsilon be considered a popular nameplate in Europe? 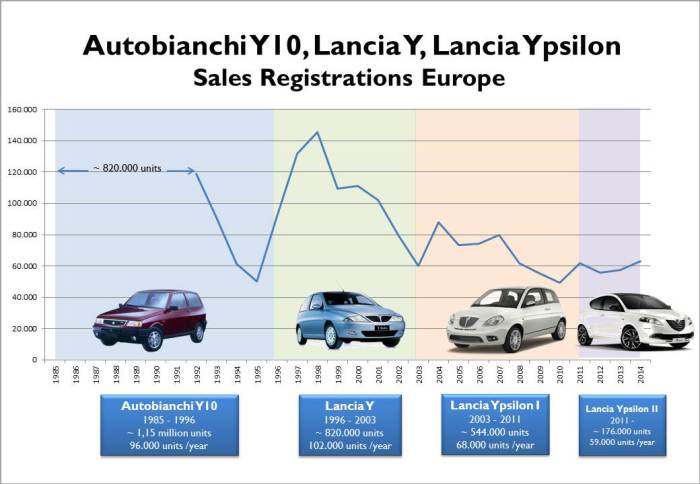 It can’t be said that the Ypsilon is a successful nameplate. During its best years it sold around 100.000 units per year. This leaves the Ypsilon quite behind the real leaders of the market. The second generation was the most popular and even if the coming generations improved in all matters, the demand didn’t stop falling. Source: bestsellingcarsblog.com and left-lane.com

European and Italian car industry has changed a lot in the last 30 years. When the first generation of the Lancia Ypsilon was launched (by that time it was called Autobianchi Y10) the industry was strongly boosted by many government incentives and Europe headed to good economic years. The Y10 managed to sell more than 1,1 million units in a bit more than 10 years. Then in 1996 the subcompact changed name but kept its design language principles and during its life cycle the brand sold around 820.000 units. The third generation was launched in 2003 and 8 years later sales totalled 540.000 units. With the arrival of the latest generation, the brand added 2 doors so it could be more differentiated from the popular 3-door hatch Fiat 500. But the current Ypsilon has had to deal with European car industry crisis, Italian economic problems and the management latest decisions on the future of the brand. During the first 3 full years of the current Ypsilon (2012-2014) the company sold 176.000 units, which is around 59.000 units/year. These numbers clearly indicate that the small Italian car demand has been continuously falling over years, with some exceptions.

The figures show how important is Italy for the Ypsilon “success”. In Italy, since the year 2000 the Ypsilon made from 50% to 92% of the brand’s sales in that country. The second chart shows the percentage of Italian sales on the total for Europe. Last year 81% of the Ypsilon sold in Europe were delivered in Italy. Source: bestsellingcarsblog.com and left-lane.com

The analysis turns even more interesting when looking at the sales data in Italy. Since the year 2000 Italian sales counted for 87% of the Ypsilon’s total European demand. That’s certainly a big share and shows how popular the car is in its home market, and unpopular outside of it. Regarding its share within the brand, the Ypsilon counted for 46% of Lancia’s European sales in 2009 and this share jumped up to a shocking 90% last year. This result corresponds to Marchionne’s announcement of leaving Lancia with one market (Italy) and one nameplate (Ypsilon) by 2016. All of this has a negative effect on the Ypsilon commercial performance and for sure has made of it the subcompact that only Italians know. Certainly to sell 59.000 units/year from which 80% are delivered in Italy, isn’t a good reason for celebrations. Thus, neither the brand’s nor the little Ypsilon’s future doesn’t seem to be the best. A reason to celebrate? 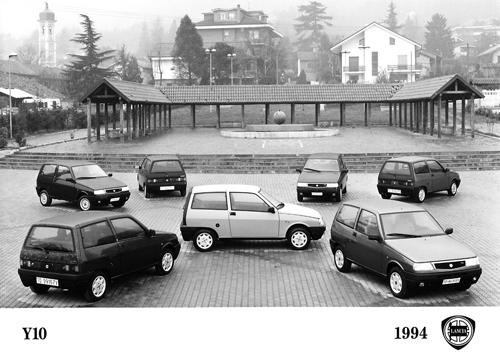 Spy shots of the what is supposed to be the updated version of the Lancia Ypsilon.

4 thoughts on “Should Lancia celebrate the Ypsilon’s 30th birthday?”