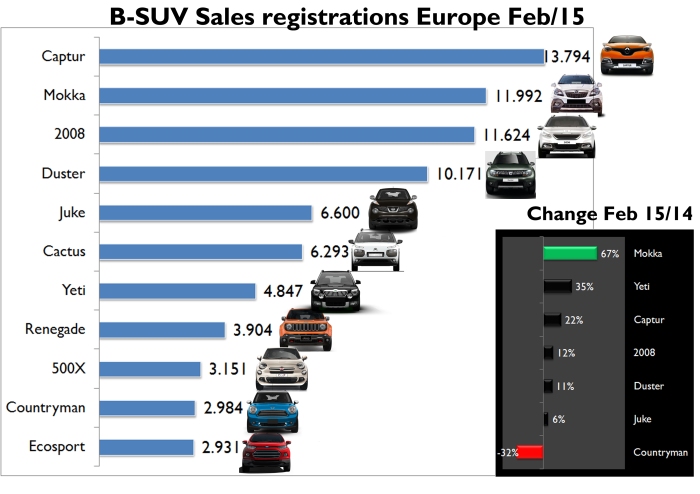 In February 2015, European B-SUV sales totaled 80.000 units, or 41% more than Feb/14. The rise was possible thanks to the excellent demand of the usual leaders and the arrival of the couple from FCA, the Citroen C4 Cactus and the Ford Ecosport. Source: JATO

European B-SUV sales rose by 41% in February to 80.000 vehicles, according to JATO Dynamics data. The increase resulted from a larger offer and better results for the majority of the nameplates available one year earlier. February registrations benefited from the arrival of the Fiat 500X , Jeep Renegade, Ford Ecosport, Suzuki Vitara and Citroen C4 Cactus, which were not available one year ago. However it wasn’t the only cause of the growth, as the remaining models were able to post a positive growth of 11%. The new comers registrations counted for 21% of the total, while sales for the Opel/Vauxhall Mokka went up a massive 67%, +35% for the Skoda Yeti, and 22% more for the Renault Captur. The Mini Countryman/Paceman was the only small SUV to register a negative growth basically because of the arrival of the Jeep Renegade (in the same price range) and because it is getting old.

During February, the Renault ranked first again with 17% of the segment sales. The other 3 nameplates to control a double-digit segment share were the Mokka, 2008 and Duster. The good result of its models allowed Renault-Nissan to keep its pole position with 38% of total sales, whereas PSA came second with 22% share. GM has 15% and was followed by FCA with almost 9%, outselling VW Group with only 6%. February figures show also that the couple from FCA along with the Opel Mokka took sales away from the Nissan Juke, Renault Captur, Dacia Duster and Mini Countryman, when comparing the sales registrations to those of January 2015. 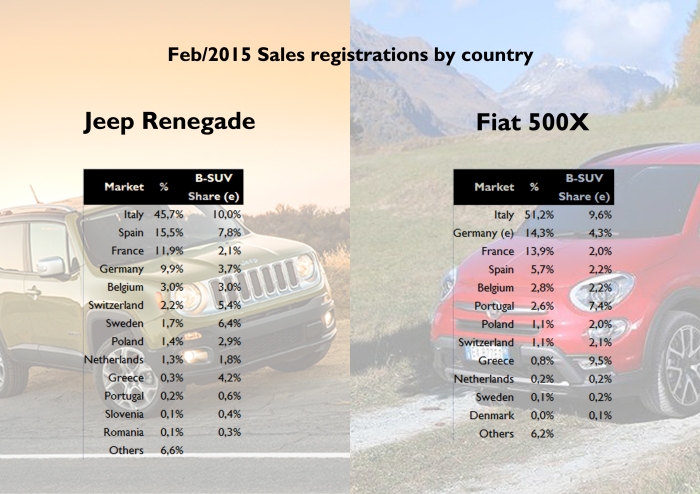 46% of the Renegade sales in Europe took place in Italy, allowing this car to control around 10% of the Italian B-SUV segment. It was the highest and it was followed by a very decent performance in Spain, which became the baby Jeep second largest market. In the case of the 500X, Italy counted for more than half of total European sales with Germany and France ahead of Spain. Very good sales penetration in Portugal and Greece. Source: JATO, bestsellingcarsblog.com

The reason for the rise on the Mokka’s registrations is the launch of its new engine and better results in Germany, where the demand advanced a massive 44% on January data. However Germany wasn’t the largest market for the B-SUVs. France ranked first with more than 21.000 units with the Renault Captur leading the ranking. Then comes Italy, where sales have risen buoyed by increasing demand for the Opel Mokka, Renault Captur and Nissan Juke, as sales numbers for the Fiat 500X (+14%) were not as spectacular as expected (when compared to January data). Generally speaking, February figures indicate that the Jeep Renegade is reaching a healthy sales peak (around 4.000 units/month), while the Fiat 500X continues to grow but with mix results, as Italian demand isn’t as strong as it should be, while non-Italian sales seem to be outstanding.