Fiat Europe gets ready for the launch of its all-new C-Segment family. The first reveal took place in June at the Istanbul motor show when the brand showed the Aegea sedan to replace the popular (in Turkey) Linea. The next step will be Geneva 2016 when it is expected the reveal of the rest of the family: the 5-door hatchback and the SW. They will be all produced in Turkey from where it will be exported to EMEA markets in an attempt to regain some of the market share left by the unpopular Bravo and improve Fiat’s position in Europe’s second largest segment. The Aegea family will help Fiat to enlarge its universe of products and decrease its dependence on the 500 family, which in some cases accounts for more than 2/3 of the brand’s sales. However the way Fiat wants to position the new Aegea may generate other problems inside the range.

Current compact segment in Europe is divided in 3 groups: the entry level ones, the upscale mainstream and the premium ones. Price range starts at 15.000 euro up to more than 35.000 euro.

European Compact segment is perhaps the most competitive one as the VW Golf doesn’t only rule without any problem, but the premium Germans have also an important role. Lately the segment has experienced a subdivision between 3 different sub-segments: the mainstreams, upscale mainstreams and the premiums. The first group is mostly composed by the Koreans and Japanese along with the Ford Focus, Citroen C4, Peugeot 308 and Seat Leon. The Golf is positioned between them and the premiums and it is a direct rival of the new Renault Megane, Opel Astra and Skoda Octavia. Finally there are the Audi A3, BMW 1-Series, Mercedes A-Class, Lexus CT, Volvo V40 and the new Infiniti Q30 that complete the C-Segment. After the Lancia Delta and Fiat Bravo’s flop, FCA wants to be back in the fight with a mainstream Aegea right in the bottom of the segment. 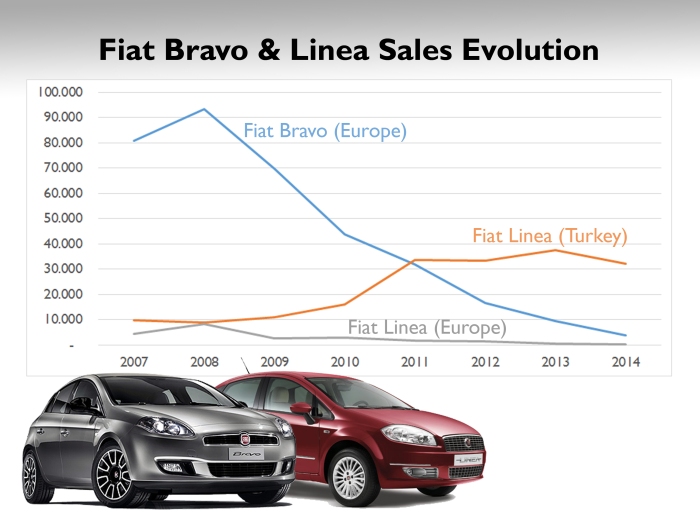 The Bravo has never popular and its sales peak took place at its first full year in the market below 100k units. Demand didn’t stop falling since then. The Linea has two stories: the sedan is very popular in Turkey with a very stable demand, while it is extremely unpopular in the rest of Europe. Source: Left Lane, Carsitaly.net and Bestsellingcarsblog.com

Fiat will position the Aegea as the most affordable compact car in Europe thanks to its origin, no-frills content (only with the necessary) and small and efficient engines. Prices are expected to start from 12.000 euro for the sedan with powered by engines with less than 100cv. This is certainly lower than the entry price of the Alfa Romeo Giulietta, at 16.000 euro. After many failures, FCA guys know they can’t do anything against the leaders of the segment so this time they’re back but with a cheap big compact priced as a B-Segment and with the idea of becoming a real alternative to the Hyundai i30, Kia Cee’d, Ford Focus and others, but at the same time to the 5-door VW Polo, Ford Fiesta, Renault Clio and Peugeot 208. In other words, Fiat will offer roominess, comfort and low prices in the middle of two segments.

I think it’s the right positioning considering the bad reputation that have the Bravo, Stilo and Bravo/Brava. It’s better not to compete in the same price range of the Golf and Co., while creating a sort of low-cost compact segment with good quality cars at very competitive prices. However the company shouldn’t expect high volumes in terms of demand taking into account that most of the clients of the C-Segment are very conservative and they don’t normally switch brands. My own forecast indicates that Fiat will sell around 50.000 units per year (at its best), right behind the 500, Panda, 500X, Punto and 500L. The next question is the impact this new family will have on the sales of the Fiat Punto, taking into account the small price gap there will be between them, the age of the Punto and the positioning of the 500 and Panda from the bottom.

If the Punto is already having problems because of its age, the arrival of a low-price compact sedan won’t help at all. The Aegea sedan is expected to be priced starting at 12.000 euro, which is less than current official price of the cheapest Punto. The 500 and Panda do also press from the bottom. Though it is a good way to come back to the C-Segment, at the end Fiat is killing the Punto. Prices taken from Omniauto.it

If Fiat keeps pushing the 500 up while it launches a no-frills compact, there will be less room in the B-Segment, in this case  the old Punto. The brand is finally killing the Punto with a 12.000 euro Aegea, as there won’t be anymore reasons to get a Punto when you can get a bigger and younger car paying just some money more. This could be a dangerous game for the brand because if it ever launches a new generation Punto or a new sub-compact, then it will be quite hard to be positioned as it has already big competitors at home. Fiat is saying goodbye to the B-Segment, Europe’s largest. It’s important to remember that the Punto used to be Fiat’s best-selling car in Europe, one of the 10 best-selling in Europe and an important source of workforce in Italy, where it is produced. Does it worth it to sell 50.000 Turkish compact Fiats?