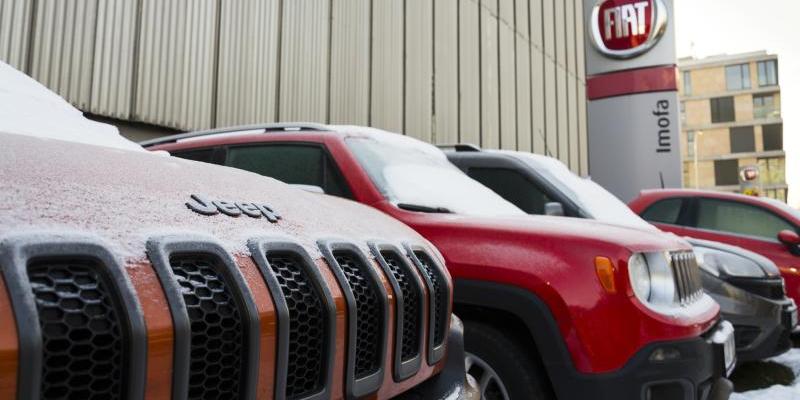 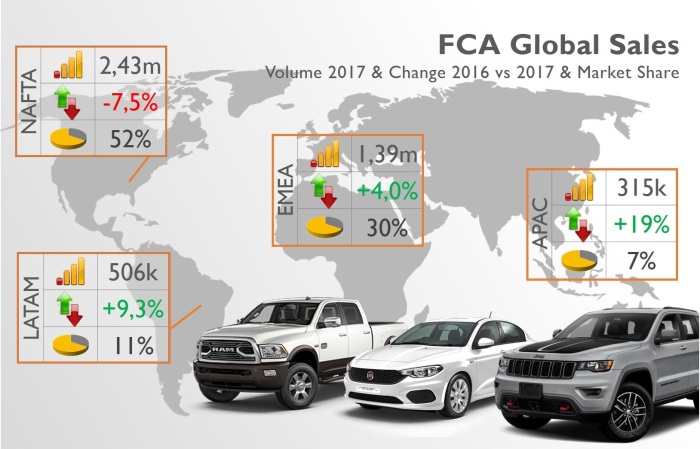 In contrast to the global trend, Fiat Chrysler’s tiny growth last year wasn’t due to SUVs. The data collected from different sources (97% of total) shows that for the first time this decade, the popular Jeeps didn’t help the car maker to grow as usual. According to FCA’s official report, the group’s combined shipments totaled 4,74 million units that included volume passenger cars, light commercial vehicles and Maserati. That’s only 20.000 more units than in 2016.

The results by country (68 countries, 98% of official total) confirm that USA is a fundamental pillar counting for 45% of global total. The strong presence of the former Chrysler group is still one of the main strengths of FCA and is not only its largest market but the main source of its profits. But last year it didn’t go as well as in the past. For the first time in 8 years, the group’s sales posted a drop, with volume falling by 8,1% to 2,07 million units. That’s the lowest level since 2013. The main reason for the negative result was Jeep’s drop (almost 100k units), which was closely related to the company’s decision of reducing its fleet sales. 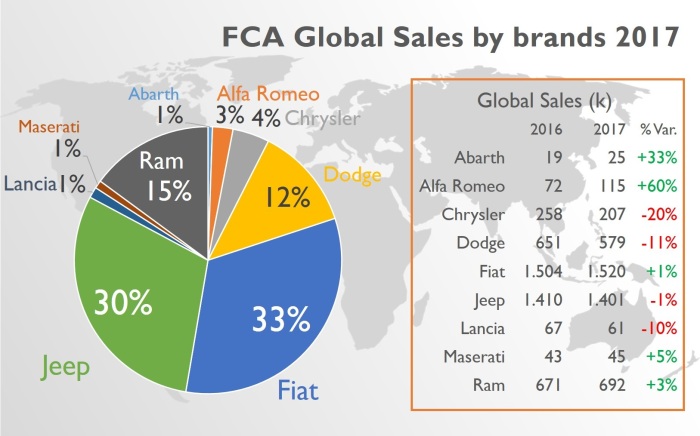 But there were also more structural issues. Excluding Jeep, also affected by the model changeover of the Compass and Patriot, the other passenger car big brands – Chrysler and Dodge – are starving for new products that simply don’t arrive. Chrysler is the worst case as its range of products is currently composed by only two models following the end of production of the Chrysler 200. Fiat brand has more products than Chrysler! therefore in 2017 its sales recorded the lowest level since 2009 when Chrysler Group was bankrupted. The 188.500 units sold last year are very far away from the 650.000 units recorded in 2005.

In the land of SUVs, a well-known brand like Chrysler doesn’t even have one in its range. There are only two SUVs in the range of Dodge, and both of them are quite aged. US Dodge sales levels also went back to the financial crisis years. If it wasn’t for Ram pickups, the situation would be definitely worse. Fiat brand is closely disappearing from NAFTA region after the end of production of the Fiat 500 in Mexico. Alfa Romeo and Maserati are still niche brands. 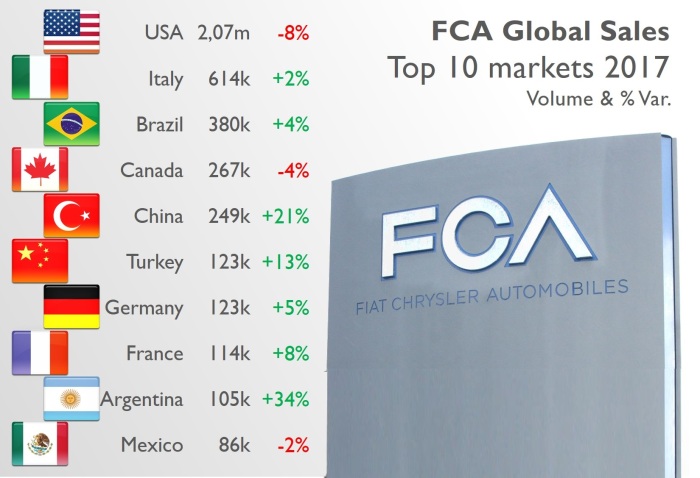 EMEA is the second largest region for FCA. A total of 1,39 million units were sold last year, up by 4%, thanks mostly to Fiat and Alfa Romeo. The excellent results of the Fiat Tipo/Egea helped to offset the falls posted by the rest of Fiat range. This model was the best-selling car in Turkey and the third in Italy, and proved that Fiat can grab a piece of the market by selling cheap and good looking cars. The rinascimento of Alfa Romeo just began in 2017 and Europe was a key region. Despite the moderate results of the Giulia, which competes in a segment that doesn’t grow anymore, the Stelvio showed good results during the last months of the year.

But the group is also facing challenging times in Europe. Fiat’s range includes only one SUV, when growth in the continent is being driven by this segment. Its top-sellers are getting aged and no launches are expected in the short-term. For the first time since the launch of the Renegade in 2014, Jeep moderated its growth and posted the lowest variation of the last years at only 2,3%. As usual in the group, the strong dependence on only one model (in this case the Renegade) affected the performance of the brand. The new Compass should help to compensate the declines expected for the Renegade this year. 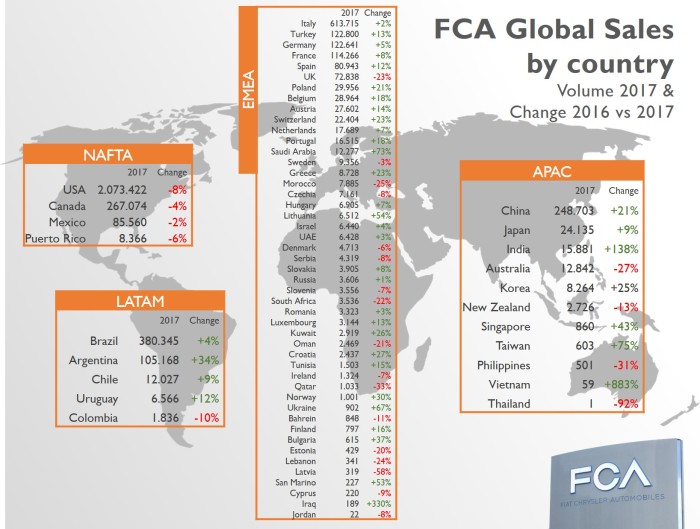 Sales in LATAM region jumped from 463.000 units in 2016 to almost 506.000 vehicles in 2017. The improvement was the result of better times in the Brazilian economy which boosted its car market. The position of FCA improved thanks to Jeep, which is now a key player in Brazil and wants to grab more market share in Argentina, Chile and other midsize markets like Colombia and Peru. But Fiat brand is also in difficult situation due to the lack of SUVs in its range.

In contrast to the industry figures, Asia-Pacific continues to be the smallest region for FCA. Still, it posted the best performance of all the four regions with volume growing by 19,2% to 314.600 units. China and Jeep are were the protagonists of the year, with the country counting for 79% of total APAC volume, and the brand representing 81%. It is quite shocking to see Maserati outselling Fiat and becoming the second best-selling brand of the group in this region, despite the decline of 9,5% compared to 2016. 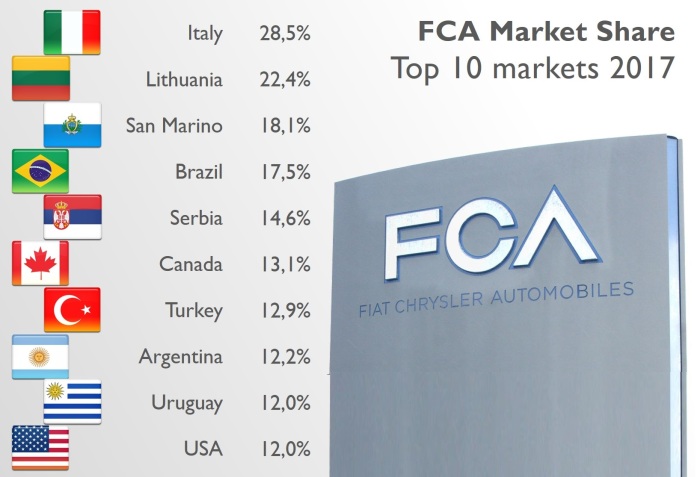 Despite their sales drop, SUVs continue to be the biggest segment for FCA. The company sold 1.74 million units from the little Fiat 500X up to the luxury Maserati Levante. The volume fell by 1,5%, which is quite surprising considering the fact that SUVs continue to invade all markets. The arrival of the premium SUVs like the Levante or Stelvio along with the new Jeep Compass wasn’t enough to mitigate the big drops registered by three key products: Jeep Cherokee (-21%), Fiat 500X (-16%) and Dodge Journey (-19%). This is why FCA lost a magnificent opportunity to increase its global volumes. 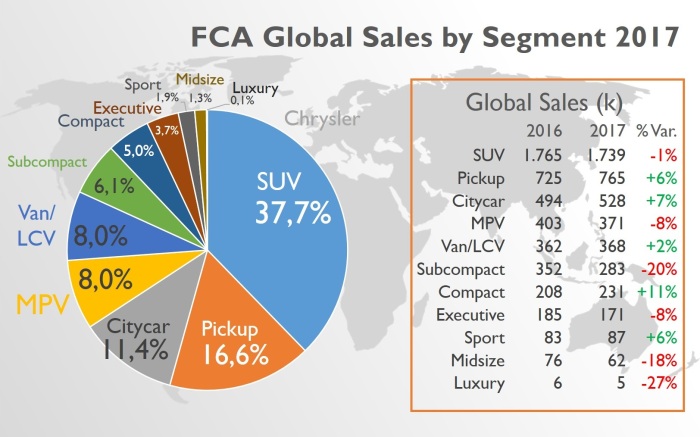 It wasn’t the case for the pickups of the group. Once again it was its second best-selling segment and last year the global sales increased from 725.000 units in 2016 to 765.000 units. The Pickups from Ram brand were FCA’s top-seller model with 615.000 units, up by 3,2%. Growth was stronger for the Fiat Toro, available in LATAM only and a big success since its introduction in 2016. Its sales rose by 45% outperforming the Strada, its little brother. The Fullback more than doubled its 2016 results but it is still a rare thing to see in the streets of Europe.

Fiat’s strong presence within the group means that small cars are also a big business. Sales of city-cars, represented by the popular Fiat 500, Panda, Uno and Mobi totaled 528.000 units, up by 6,8%, counting for 11% of FCA’s global sales. The Mobi was the only driver of growth. The subcompacts didn’t have a good year with total sales down by 20% to 283.000 units. While the Palio and Siena were discontinued and the Punto is almost out of production, the Lancia Ypsilon, available only in Italy was FCA’s top-selling subcompact. 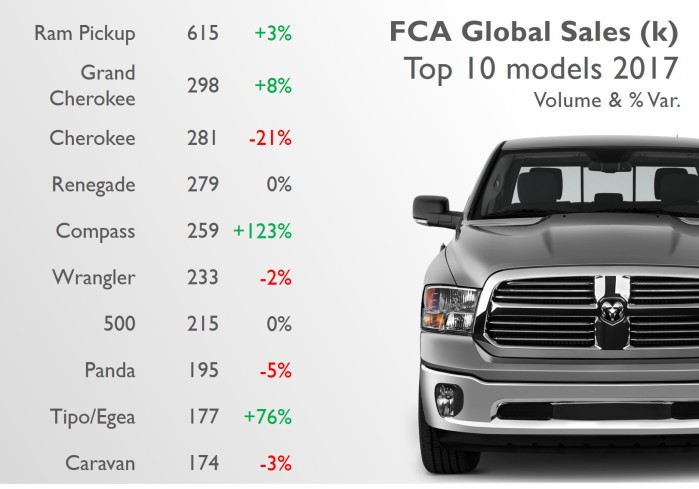 The compact segment had the best performance. Its sales grew by 11% to 231.000 units, composed by Turkish-made Tipo/Egea, which recorded brilliant results (+76%) and hit FCA’ top 10 by models at the 9th position behind the Panda and ahead of the Dodge Caravan. Other compacts included the 7 year old Giulietta (-23%), the extinct Dart (-76%), and the Chinese flops Fiat Viaggio and Ottimo.