Jeep is the only truly global brand of FCA with presence in all of the regions where the group operates. Unlike Fiat brand which is only popular in Brazil and Europe, the American SUV brand has been gaining market share during the last years thanks to the localization of production in key markets. In 2009, when Jeep was one of the brands of the bankrupted Chrysler Group, its global sales totalled around 350.000 units. Last year Jeep sold 1,4 million units. The rapid growth is the consequence of the SUV boom that spread everywhere.

It is not the only global brand of FCA. It is also the one with the highest growth potential and value for eventual buyers. To be a SUV maker in a world that’s only interested on SUVs makes you really attractive. This is evident when looking at Jeep sales figures right after it hits a market: Europe, Brazil, China and more recently India can confirm this healthy trend for FCA. But last year things didn’t go as good as in the previous years, turning on the alarms for what is considered the source of growth and profits for FCA.

For the first time since 2009, global sales of Jeep posted a drop. Last year its volume fell by 0,7% to 1,4 million units, after posting a record of 1,41 million in 2016. While the brand registered records in Asia, Latin America and Europe, the volume tumbled in North America, its largest market. As FCA continues with the planned lower fleet volumes, primarily for Jeep, overall sales showed a negative change. In fact the US fleet mix for all brands of FCA fell from 24% in 2016 to 19% last year.

But the reduced fleet mix doesn’t explain all. The model changeover for the Compass, the drop of the Patriot and the double-digit sales fall posted by the Cherokee explain the other part of Jeep’s negative results. Jeep sales in NAFTA fell from 1,03 million units in 2016 to 918.000 in 2017 (down by 11,9%). The drop could be considered “normal” in a market that fell by 1,5% last year, but it wasn’t when considering the segment where Jeep plays. Total SUV sales in North America grew by 6,2% to 8,2 million units, which was definitely a lower growth than in the previous years, but still a positive one.

Jeep lost market share in one the world’s largest SUV market because of lack of models. Currently the brand has only 5 different nameplates in its range, which is in my opinion a small number for a brand that had a target of selling 1,9 million units in 2018. USA and Canada SUV segment has still room for more nameplates, especially above the Grand Cherokee, which is not considered a full-size SUV there. Jeep should make use of the increasing demand now and not when the segment’s growth starts to slowdown.

The other problem is related to the timing and restylings. FCA hasn’t been particularly good at planning and when the industry standard is about 6/7 years for the life cycle of a car, FCA extends it to 8 or 9 years. This may save money but at the end the company loses market share to more modern cars from its rivals. Restylings are also part of the “wise” move from FCA. The updated Cherokee revealed in Detroit this month should have arrived last year in order to prevent the accelerated sales drop. The all-new Compass hit the markets 6 years after the restyling of the first generation. 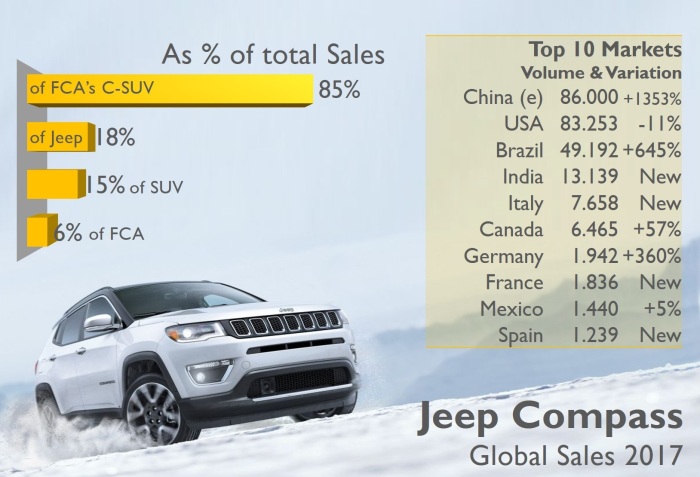 The “lousy job” in Europe based on Marchionne’s words is also explained by this lack of planning. While total SUV registrations grew by a massive 20%, Jeep had to settle for little, with volume growing at 3,1%. The brand’s market share fell from 2,7% in 2016 to 2,4% in 2017. They are simply not making use of the booming sales that are driving growth in Europe because the brand has only concentrated its effort in one model, the Renegade. It hit the market in 2013 and helped the brand to achieve a decent market share in Europe. But nothing else was launched until the arrival of the Jeep Compass last year. This means that Jeep wasn’t able to keep the initial growth posted by the Renegade.

The Grand Wagoneer and Scrambler are supposed to be revealed by the end of this year and they are supposed to keep the good pace started with the updated Cherokee and all-new Wrangler. But the launches confirm that no big target will be achieved as long as the new cars are delayed or simply don’t arrive in time. Five models and no consistency in the timings of the product launches won’t help to make use of the SUV boom.