The 2018 edition of the Paris motor show will be the occasion for some carmakers to show their latest products for Europe, and the event where many others decided to skip. FCA brands will not take part of the show because according to the company, the potential sales and publicity did not justify the outlay to do it. However, as it happens to Ford, Nissan, Volvo, Volkswagen, Opel, Aston Martin, Bentley, Mini, Infiniti and Lamborghini, the real reason is mostly related to the lack of new cars.

Despite the absence of these brands, the show will welcome very interesting new products. One of them is the all-new Suzuki Jimny, the tiny Japanese SUV that is available in many countries. The new generation follows the same pattern in terms of functionality and capability, but features a big improvement in terms of design and perceived quality. The 2019 Jimny continues to feature 3-doors, bucking the market trend for 5-doors. Based on its dimensions (3.645 x 1.645 mm), the Jimny is still closer to the definition of a city-SUV than a B-SUV, fueling anticipations for a future A-SUV segment.

In my opinion, Fiat and Jeep should develop a product like the Jimny. The Japanese SUV is small, iconic, functional, and positioned as a semi-premium vehicle. That is exactly what the Fiat 500 is: a city-car whose success is based on its personality with an average price above its rivals. If consumers around the world demand SUVs, why not to give them a tiny SUV using the Fiat 500 successful attributes? I mean, the second generation of the Fiat 500 could be a SUV, and not a city-car. 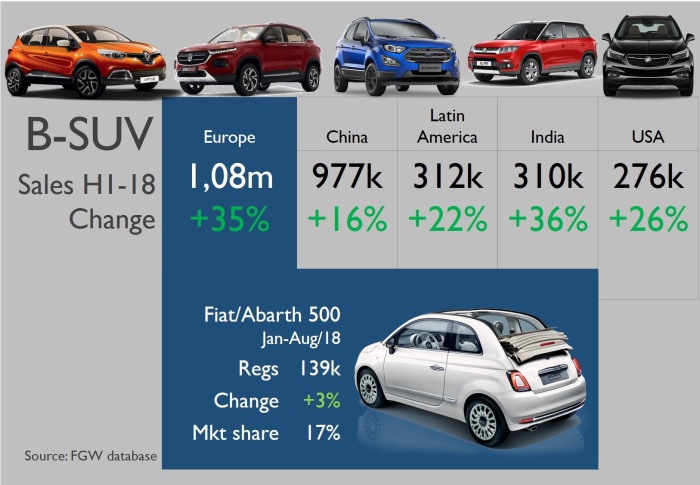 The rapid growth of SUV sales around the globe is forcing the carmakers to explore new subsegments. As the small SUVs (B-SUV) continue to gain share and the average length is somewhere between 4.100 and 4.200 mm, the market could evolve and smaller SUVs could see the light in the coming months. The Jimny has never had a big role in Europe, mainly because it features 3-doors only. However, Suzuki is not a protagonist there, so it can’t be concluded that a potential A-SUV couldn’t work.

Fiat is known for its city-cars. It is the top-selling brand in the A-Segment, with 250.000 units sold in Europe between January and August, counting for 30% of the segment. The mix is composed by the Fiat/Abarth 500 with 56% of the total, and the Panda (44%), but the former is the real protagonist in Europe, as 76% of its European registrations through August happened outside Italy. The 11-year-old city-car still shines in many countries, with double-digit growth in big markets like France and Spain.

This success could be reinforced by transforming the Fiat 500 into a tiny SUV following the Jimny guidelines and dressing the iconic Italian design. I am sure that many of the current Fiat 500 consumers would be keen to drive a taller, more capable and aggressive version of their popular city-car. At the end, the idea is to keep the current length (as the Jimny) and the 3-doors. But why rock the boat if the boat is sailing happily along? City-cars don’t have a sales growth potential, SUVs do.

The off-road, boxy version would be commissioned to Jeep, which could finally have its baby SUV. It could even gain some centimeters of length and could even feature a 5-door version, following the example of the Wrangler, which is offered with 3 and 5 doors. A model like this would not only have a potential in Europe but also in India, Brazil or even Japan. Both cars could be built in Italy helping the company to maintain the production capacity there, as the next Panda is expected to be built abroad. Speculation? Maybe. But the true is that both models would give oxygen to Fiat and more growth potential to Jeep.