The last 12 months have been extremely good for the European division of FCA. The car maker has been posting a continuous monthly growth and in many cases outpacing the industry’s average increase. The European car market is back to growth thanks in part to economic upturn and more confidence from consumers and all car makers. FCA is making use of this good trend by launching more products and becoming more aggressive commercially speaking. Its monthly sales continue to post double-digit growths, while more new cars are expected to hit the market in the coming months. However when looking closely at the results, it’s clear that there’s something wrong.

During the first three months of this year Fiat Chrysler Automobiles has registered almost 231.000 units in the top 5 European markets – Germany, UK, Italy, France and Spain. That’s a shocking 17,4% more than the volume registered in the first quarter of 2015, and is for sure one of the best performances among the big players. Fiat brand and Jeep are the drivers of this growth thanks to their latest launches – the Fiat 500X and Jeep Renegade – which make part of the fastest growing segment in the region: SUVs. In terms of growth, the Italian-American manufacturer even beats its main rivals from Europe as VW Group from Germany, and PSA and Renault Group from France. FCA’s growth was almost 6 times higher than the one posted by VW Group, and more than double the one recorded by PSA.

But looking into the detail, it’s clear that FCA is not really growing in a healthy way. They are now more dependent on the Italian market than before, with Italy counting for two-thirds of the total registered in the top 5 European markets. That’s quite a lot considering the numbers of its rivals, with VW German registrations counting for 48% of the total, and French figures counting for 47% of Renault Group total and 48% of PSA’s. The result is even worse for FCA when considering the evolution. The comparison between 2015-Q1 and 2016-Q1 shows that FCA is the only European car maker to increase its dependence on its home market, as VW reduced it from 49% in Jan-Mar 2015 to 48% one year later, while France sales remained at 47% and 48% of the total for Renault and PSA. One year ago, the Italian registrations counted for 62% of FCA total.

This means that the spectacular 17,4% gain posted by FCA during the first three months of this year is mostly explained by its Italian operations. It’s quite normal that the home market always represents a big part of sales of any company. At the end FCA is a well-known company in Italy with an important presence in Turin and in the south of the country. But the latest figures indicate that without its strong commercial campaign in Italy (there is a special offer for the Punto at 4.800 euro), the group wouldn’t have gained any market share in the four remaining markets. Excluding Italy, FCA’s market share in Germany, UK, France and Spain combined, would be 3,35% in 2016-Q1, the same result posted in 2015-Q1. When Italy is included, then its market share jumps from 7,37% in 2015-Q1 to 8,00% during the same period of this year. 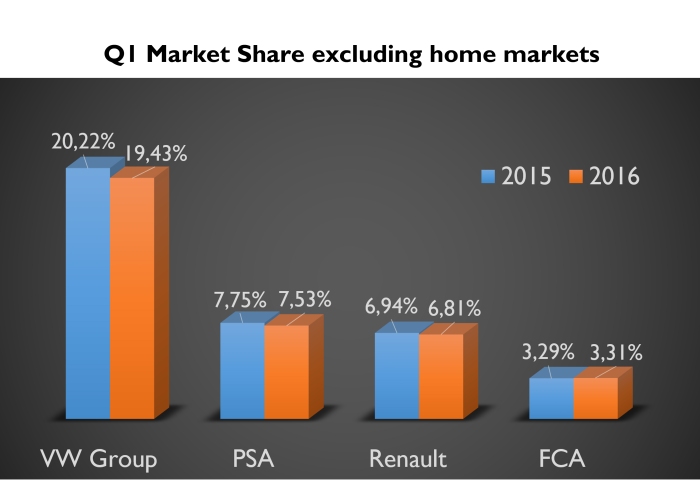 That’s certainly a bad result considering the fact that markets like Spain and the are also posting very positive results. Besides, VW diesel scandal has had a negative effect on its sales leaving more room for its competitors. In fact the German giant has seen its Top 5 European market share dropped from 23,55% in 2015-Q1 to 22,43% in 2016-Q1. The other problem is FCA’s strong and historical dependence on the 500 model, and the fact that this small car is now passing through its decline phase of its commercial cycle. Last year the Fiat 500 counted for 20,9% of FCA total registrations in Europe, and despite the introduction of its facelift in July 2015, the city-car keeps falling in the rankings. In 2016-Q1 the Fiat 500 registrations fell by 14% in the UK, and 5% in France, two important markets. Meanwhile the Fiat 500X and the Jeep Renegade keep gaining segment share but they have probably reached their sales peaks, leaving Jeep with no more new models to keep the outstanding growth posted in 2015.

8 thoughts on “How real is FCA’s growth in Europe?”