On May 6th 2014 Sergio Marchionne and his guys presented the world the plan for the following 5 years. The long 13 presentations aimed to show the analysts that the company had a clear product plan with specific sales targets. By that year, the alliance between Fiat Group and Chrysler Group was emerging as a key player in the global automotive industry. Hence the big goals which are now quite far in terms of both volume and new cars.

Based on that plan, FCA was due to sell 7 million units by the end of this year. It supposed a big jump from the 4,2 million vehicles it sold in 2013. The strong growth was going to be driven by an aggressive product plan which included 48 all-new cars to be launched between 2014 and 2018. The idea was to boost sales and strengthen FCA’s position in the global context.

Despite the good intentions, the plan resulted to be quite optimistic and almost impossible to achieve without a big partner. As the sales targets became very difficult to meet, and the company struggled to launch so many different cars, the top management started to change its priorities and focused on profits. At the end, that is all about: making money, and profits in the car industry are not necessarily associated to the quantity of cars you sell.

FCA is expected to sell around 4,9 million units in 2018 (my own revised forecast). It means that it will only meet 70% of the goal set down in 2014. Instead of selling more cars, the company has spent more time and money on improving its presence in China and India, and deal with the ups and downs in Brazil and Europe. The situation today is quite similar to the picture in 2013, but now FCA looks stronger financially speaking.

However, the focus on profits and zero-debt has a price. From the 48 all-new cars announced in May 2014, the company has only launched 20 of them. It means that only 42% of the product plan was fulfilled and most of its brand are starving. FCA is now more profitable (EBIT margin in Q1 2018 recorded 6,0%) but continues to lose market share in the world’s top markets (April 2018 saw the second lowest monthly result in Italy of the last 20 years). 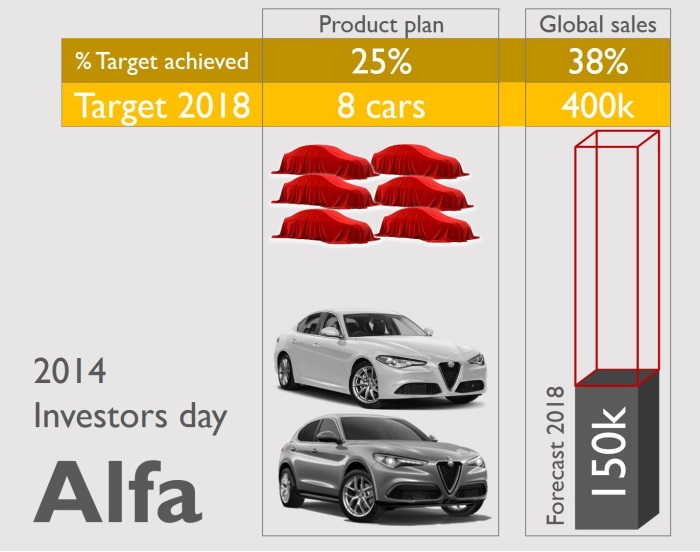 Alfa Romeo. Only 2 of the 8 Alfas announced in 2014 became a reality (Giulia and Stelvio), and this year the brand is expected to sell around 150.000 units, which is 38% of the goal (Marchionne then moved the 400.000 units target to 2020). Among the cars that hasn’t arrived yet are the all-new Giulietta, an executive sedan to rival with the 5-Series and a compact SUV.

Chrysler. Chrysler is in a bad situation with only 2 models available from the 5 it was supposed to have in 2018. Hence the poor accomplishment, as the brand is expected to sell 190.000 cars this year against a goal of 800.000 units. The Chrysler 200 was one of the 5 new cars, but the car was a flop and is now discontinued. The brand needs a SUV urgently.

Dodge. It presented an ambitious plan with 5 new cars which included the all-new Dart (the new generation of the car presented in 2012), a midsize SUV (to replace the Journey), a small and executive sedans, and a big coupe. Not only none of them hit the roads, but the brand has now fewer nameplates than in 2014 as the Dart was discontinued in 2017. Dodge should be selling around 480.000 units this year, or 120.000 less than the total it expected to back in 2014. Average age of Dodge cars was 6 years in late 2017.

Fiat. By that time, Fiat was struggling with its European division while Brazil was heading to a big crisis. The strategy for Europe was to position two different sub-brands with the 500 family as the aspirational one, and the Panda, Tipo, Punto making part of the functional range. Fiat aimed to sell 1,9 million units in 2018 but the reality indicates that its European sales started to fall, and Brazil is taking off again. My own forecast indicates that Fiat will sell around 1,58 million vehicles this year.

The reason for the big gap between the target and the actual is related to Fiat’s aged range. In 2014 the management promised 17 new cars that included 3 SUVs and the new generations for the Punto and Panda. Four years later the brand has launched 9 of them, and most of them in Brazil. The current Punto is about to be discontinued without a successor, and the Panda will have to wait more time to see a new generation. Meanwhile the brand sells only one SUV in Europe and none in Brazil. 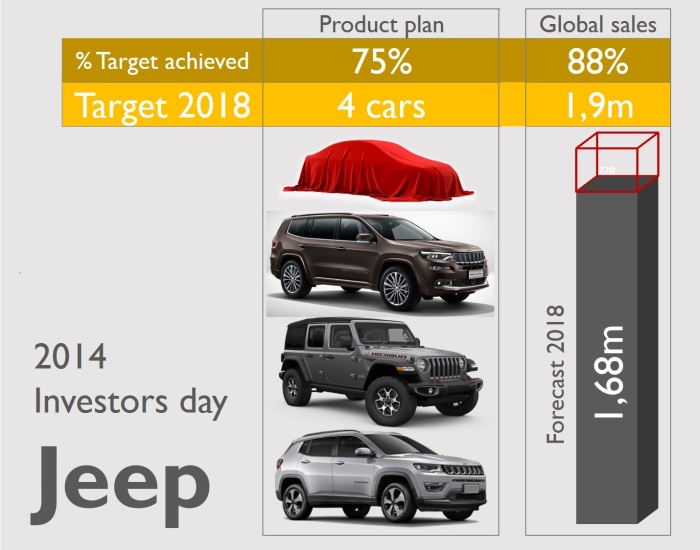 Jeep. The SUV brand is perhaps the best case considering its positive results and the percentage of achievement of the goals. Between 2014 and 2018, Jeep has launched 3 of the 4 cars it planned (new Compass, Commander and new Wrangler), and only the all-new Grand Cherokee is missing. In terms of volume, Jeep will sell 1,68 million units by the end of this year, which is below the 1,9 million units goal.

Maserati. Big plans for Maserati in 2014. The luxury brand was living its best years with the arrival of the Ghibli and new Quattroporte. Then came the Levante, which boosted the brand to a record of almost 49.000 units last year. However, the growth has stopped and now the brand feels the consequences of not having more fresh products. Today Maserati was supposed to have 2 more nameplates (new Alfieri and Alfieri Cabrio) and the new Granturismo in order to sell 75.000 units this year. But the brand will barely sell 40.000 cars in 2018, as the Levante demand shrinks and the launch of the midsize SUV (aka Levantina) has been delayed.

Ram. It is the only brand of the group to outperform the goal set in 2014. Its global sales are expeced to total 815.000 units this year, or 195.000 units more than the target set 4 years ago. Consumers in America continue to increase their demand for trucks, and the Ram pickup is exactly what they are looking for. While the new generation is due to reinforce the appealing of Ram brand, the rebadged products like the Ram 1500 should open more markets outside North America.

2014 plans proved to be too optimistic and not aligned to world trends. For example, the company focused a big part of the plan on sedans and didn’t foresee the SUV boom. The next appointment is on June 2018 when Marchionne will present the new plan for the coming years. Very few is known about it, but the lesson is clear: there won’t be any sales targets in the slides.