It happened quickly. Spy pics of the new Jeep D-SUV were released in the web and soon everyone was talking about them. Then, some hours later, Jeep published the first 4 official pictures of its all-new Cherokee. Car forums were full of comments about this weird new SUV. I checked the opinions in several websites in and outside the US. If the sales of this new Jeep are going to replicate the number of comments, then it will be certainly a success. But unfortunately (or fortunately) car fans are strongly divided into their perception of the design of the Cherokee. The controversy is good as the car becomes popular even before its launch. Even Ralph Gilles, Chrysler design chief, had to intervene in the discussion to calm down everybody. He tweeted “we are shifting some paradigms around.. it is time” pointing at those claiming for a ‘real’ Cherokee. The discussion gets tough in USA as there hasn’t been any Cherokee nameplate since 2001, when it was replaced by the Liberty, aka Cherokee in overseas markets. That’s a key point for the introduction of this SUV. The Cherokee nameplate is very strong there and people normally associate it with the boxy and rough family mid-size SUV that was so popular in the 90’s. Now Jeep decided to bring it back to life in the form of a very particular SUV that doesn’t have anything to do with former or current range.

Good for the front view. Isn’t it the side surface to flat?

Without considering my opinion about it, I think Jeep guys should be very careful about this new proposal. It is good, indeed, to change and propose new concepts. If the brand wants to maintain its success it must evolve. They began with the new Grand Cherokee, which has had a big success thanks to its awesome features, and now they come up with the new Cherokee. Aren’t they going to far with this new design? Are Americans willing to pay for a SUV using a classic nameplate but wearing a bold dress? How good is it for the brand to risk in D-SUV segment when it is the segment in which it has an interesting market share? To re-think the design and concept of a car will be always welcomed. In fact most of popular car makers forgot it and now most of the cars sold worldwide are boring and they all look the same. So in that issue I think Gilles and Co. made a wonderful job (from the 4 pictures of the front we can see so far). That’s a characteristic of Italian cars and now it seems is making part of Chrysler products. But I think they should had chosen the C-SUV segment to prove it as it is a segment closer to crossovers and daring designs, and Jeep doesn’t have that much to lose. Doing it in D-SUV means to risk the reputation of a nameplate and future sales.

At the end, if they could make it with the Fiat 500 in USA and then they start to have success with the Dart, why not to do it with Jeep? Time and demand will tell us. 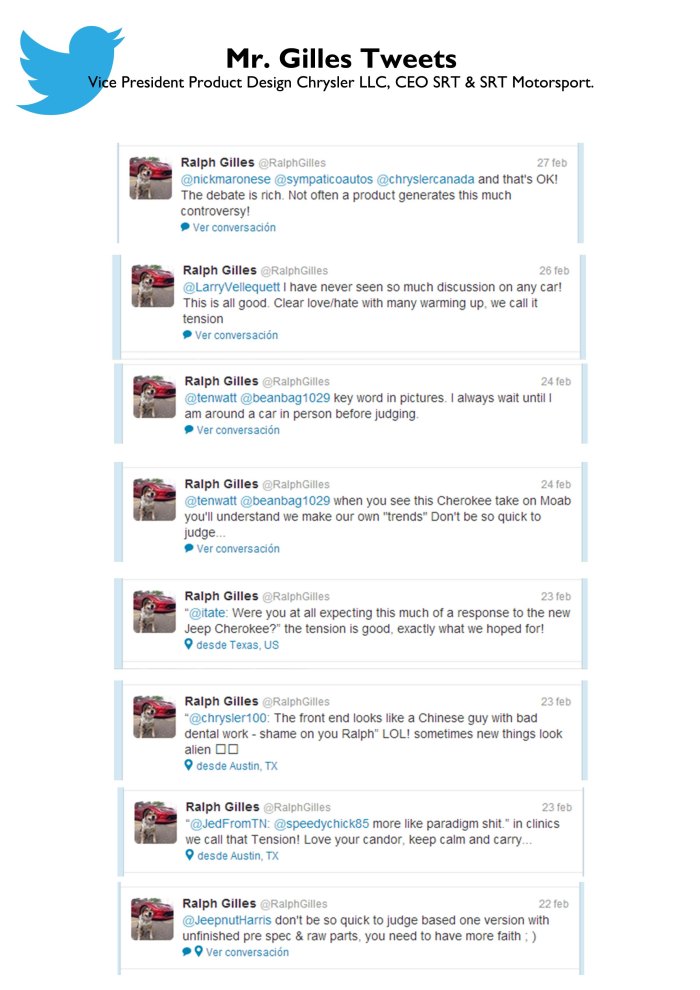 22 thoughts on “What is it about the new Jeep Cherokee?”