The next market to be analyzed is Turkey. It is one of the most important car markets for Fiat-Chrysler because of two reasons: strong local demand and export facilities. Turkey is now almost as big as Spanish market, and is expected to become on of Europe’s largest ones in the next 10 years. The expansion is explained by the fact that a big part of the population doesn’t have a car yet and the country continues to receive foreign direct investment with more and more car factories. Besides, it does not make part of Europe but is close to it, so it is not suffering the consequences of Euro crisis (not as much as European countries), and it benefits from being close to EU market. It is more or less like the case of Brazil or: a fast growing market with high local production, and good economic perspectives. In this good scenario, Fiat-Chrysler is a key player with so many projects to come.

There isn’t a lot of information coming from Turkish car market. However it is clear that it is a big market with its own stamp. In 2012 almost 780.000 passenger cars and LCV were sold there. The market is down 10% and is composed 72% by passenger cars, and 221.500 LCV. This analysis includes LCV as they are an important part of local production and Fiat-Chrysler is perhaps the leader of this segment. Passenger cars fell 6.3% to 556.280, which is above Netherlands level. Light Commercial Vehicles sales fell 18%. The bad results are similar to Southern European car markets. But the reason for this fall is different from endemic European crisis. Turkish economy slowed down in 2012 affected some how by the crisis in Europe, and auto taxes were increased. Nevertheless this market doesn’t have the same production overcapacity problems of Italy, Spain and France, and therefore it can return to positive numbers easily. Turkish car market is usually analyzed by origin as local products benefit from lower taxes and therefore higher demand. In 2012, local car passengers and LCV counted for 37.4% of total sales, down 18%. That change is higher than imports fall, down 5%. The difference could be explained by the fact that Turkish Lira had 3% revaluation against the Euro, and 5.4% against US dollar. This made imported goods cheaper while had an impact on exports, down 7.7%. 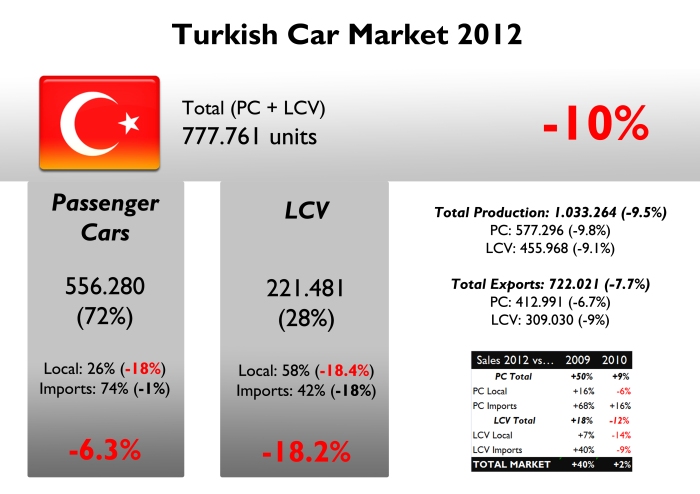 Turkey is certainly a big market in terms of sales, production and exports. Eventhough last year all of them fell, its size is almost as big as Spanish one, but with much better perspectives for the coming years. If it wasn’t because of imported passenger cars, the market would had fallen even more. They benefited from a cheaper Turkish Lira. But the rise on taxes had an impact in overall market. Source: TSKB Research, Gaye AKSONGUR

Considering Passenger cars market only, Renault leads the market mainly because of locally made products, which count for 92% of its sales (November 2012 YTD data). However to produce in Turkey doesn’t mean to lead the market. After Renault, there are VW, Opel and Ford, which don’t produce passenger cars in Turkey. Then comes Fiat, Hyundai and Toyota, with local production. In terms of origin, Turkish market looks more like European ones, but LCV are more popular. In terms of groups, VW was the star of the year. It gained more than 3 bp of share, which means that it did much better than in any European market. As usual, Hyundai is next, but this time it didn’t do as well as in Europe. The big losers of 2012 were Fiat and Ford. The top 7 best-selling groups count for 80% of the market. As there isn’t enough information is hard to determine the composition by segments, but it is clear that C-Segment sedans are the most popular cars there, followed by B-Segment cars. City-cars are extremely unpopular, while mid size sedans, D-Segment, have some relevance. Premium cars (E and F segments) are very rare. SUVs are much more popular than MPVs.

Just as it happened in Europe, in Turkey, VW, premium brands and Hyundai increased their sales and share, while Renault, PSA, Ford, Opel and Fiat had big falls. VW Group impresses thanks mostly to VW brand and Audi. In the opposite side there is Fiat-Chrysler, which is now in 6th position after Ford and Hyundai. Nevertheless its share is higher than in any big European market. Source: www.bestsellingcarsblog.com, www.e-otodergi.com

The group was the big loser in Turkey last year. In car passenger market it was the major car group with the highest fall year-on-year. Therefore it lost 1.73 bp of share, and now it occupies place # 6 in the ranking by groups, surpassed by Hyundai and Ford. Nevertheless Fiat continues to be an important local player as it is Turkey’s second largest car passenger producer and has several future projects in this country. Fiat-Chrysler sales are down 22.3%. If LCV are included (-18.2%), then total results are a bit better: -18.8%. The market share in passenger cars shrank, but was stable in LCV market. One of the reasons for the big fall in passenger cars is the halt of production of one of the best-selling cars, the Albea, without a clear successor. The absence of this model made Fiat brand to fall 23%. As this brand counts for 95% of the group’s sales, then Fiat brand’s fall was enough to push down the whole group, despite the good performance of Alfa Romeo and Lancia. 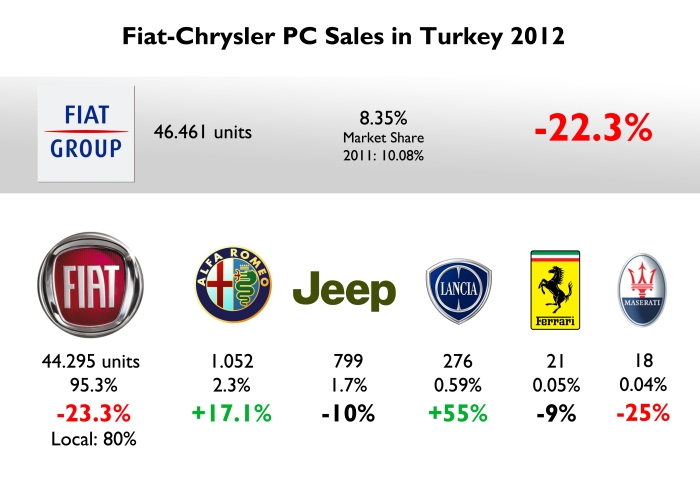 The group’s presence in Turkey is mainly occupied by Fiat brand and its local products. Total sales are far from the results in France, Germany or UK, but market is the third best in Europe, after Italy and Serbia. Good for Alfa Romeo, which sold more than 1 thousand units (more than in Greece or Portugal). Lancia had a big jump but is still very unknown. Source: www.bestsellingcarsblog.com, www.e-otodergi.com

The information by segment is also unprecise. However I  made some estimates based on the information I could gather. 76% of sales correspond to C-Segment: Fiat Linea, Alfa Romeo Giulietta and Fiat Bravo. Though the Linea is the sedan version of the Punto (B-segment) its positioning in Turkey places it in C-Segment (as it happens in Brazil). The Linea was the best-selling passenger car in Turkey. This makes of Turkey one of the 3 countries in the world where a Fiat model leads the whole market, along with Italy and Serbia. Then comes the B-Segment, where the Punto, Albea and MiTo count for 21%. This is the segment where the group lost more  market share, as it is the one where the Albea used to compete. In 2011 almost 9.000 units of this sedan were sold. Jeep SUVs count for 1.7% of sales. And the popular 500 and Panda count only for 1% of the group’s sales, as this kind of cars are very rare to see in Turkish streets. However, both of them are the best-selling cars in A-segment. Locally made products count for 76% of sales.

Estimated PC sales by segments for Fiat-Chrysler in Turkey. Most of all cars sold in Turkey correspond to C-Segment, and Linea model. Low share for SUVs and A-Segment. It is the only market in the world where city cars don’t lead Fiat brand sales. Source: www.bestsellingcarsblog.com

Fiat is the leader in LCV market, which is very important in Turkey. Last year the Doblo was the best-selling LCV. However its sales went down just exactly as total market. Fiat-Tofas will soon start exports of Fiat Doblo to North America. Source: tuludarican.wordpress.com

Fiat-Chrysler range in Turkey is not really big. Alfa Romeo is present with the MiT0, Giulietta and 159. Fiat brand offers the 500, Panda, Punto, Linea, Bravo and Freemont. Jeep imports the Cherokee, Grand Cherokee, Compass and Wrangler. Lancia sells the Delta, Thema and Voyager. And of course Ferrari and Maserati are present with their beauties. The Linea became not only the best-selling car, but it is the first nameplate to become the best-seller of both rankings, passenger cars and LCV. Turkish love mid size sedans and that’s why the Linea, which was developed in Turkey, is longer than regular B-Sedans, such as the Siena/Albea. The Linea is based on the Punto but it is positioned in C-Segment to compete with real C-Segment sedans like the Renault Fluence or the VW Jetta. No big changes in its sales registrations compared to 2011. The second best-selling passenger car, the Punto, doesn’t shine that much, and is down  massive 24%. The Punto and Albea’s drop are the main cause of Fiat’s fall in 2012. In the first case is not quite clear the reason as it is an Italian made product. Maybe it is also too old for Turkish as it is for all Europeans. The Albea was just too old.

The Linea, developed for emerging markets, became the first passenger car to lead all rankings in Turkey. It has a great success and tough competition, specially from Renault. Source: focus2move.com, www.e-otodergi.com, tuludarican.wordpress.com 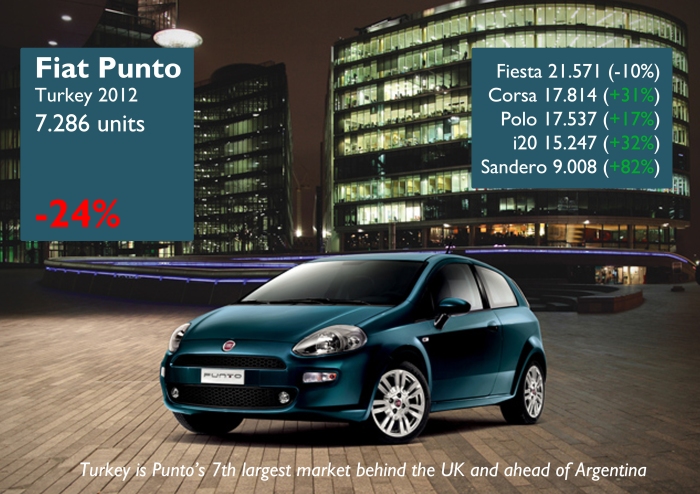 The B-Segment became larger in terms of offer and demand. However Fiat Punto’s sales declined, while most of its rivals had big jumps. The Dacia Sandero impresses. Just as it happens in Europe, Turkish begin to see old this model. Source: focus2move.com, http://www.e-otodergi.com, tuludarican.wordpress.com

Estimated sales for Fiat Albea in Turkey. Fiat-Tofas stopped production of this sedan based on Fiat Siena. It used to be one of Turkey’s best-selling cars but it was too old to continue in dealerships. Fiat may replace it in 2014. Source: focus2move.com, http://www.e-otodergi.com, tuludarican.wordpress.com

(e): estimated. The Panda and 500 lead in the small A-Segment. The Grand Cherokee is not far in its ranking, and the Giulietta/Bravo/Delta had very low sales. Source: http://www.e-otodergi.com, tuludarican.wordpress.com

Turkish car passenger and LCV market is expected to have a tiny growth in 2013. Analysts say the market will grow 3% this year. My forecast is that total sales will be up around 5% to 810.000 – 820.000 units as a consequence of better local economic conditions and more offer coming from auto makers. Actually Turkey has become the place where all European car makers want to launch their products. Lately, in the Istanbul auto show, most of car makers said they have big plans for the coming months. Renault announced it will increase production levels at its Bursa plant as they see there will be more demand for its products. Fiat and Tofas revealed their plans to invest 130 million euros in 2 new products for local and export markets (a hatchback and a sedan), while it prepares to start exports of the Doblo to North America in late 2014. The joint-venture wants to sell 270.000 cars, 160.000 of them for export*. These numbers include Opel, Peugeot and Citroen rebadged cars. However, if Fiat itself expects a flat domestic market in 2013, I think they will lose market share as the group’s passenger car sales will decline 7% to 43.000 units. This forecast is based on the fact that the Linea’s demand will be stable this year while its competitors from Renault and VW will gain more market share. Besides, the Punto will continue to fall in the ranking while the Albea will not add anymore sales, without any direct successor. It is why I think Fiat should think of start production of the all-new Fiat Grand Siena. This model, recently launched in Brazil, could fit perfectly on Albea’s potential buyers and wouldn’t be a problem for the Linea. The new Palio could also play an interesting role in B-Segment, as a direct competitor of Dacia Sandero.