With almost 30 years of service, Fiat prepares the final version of the Mille, aka Uno. This car has been one of the key products for the expansion of the brand in Brazil, and Fiat wants to be grateful. The name of this final version is ‘Grazie Mille’, which in Italian means ‘Thank you very much’ and fits perfectly to the name ‘Mille’, very popular among Brazilians. Currently, the model is just called ‘Mille’ to differentiate it from the Uno, which was launched in 2010. However the car is well-known for being the same Uno, launched in August 1984, months after the presentation in Italy. The Uno was the first global Fiat, and its mission in Brazil was to become the real successor of the popular Fiat 147. But it was in the early 90’s when the car became the Brazilian popular car and created the segment. The car was offered with small engines, but a turbo was available as well (1.4 with 118 hp). The introduction of the Palio in 1996 was a direct threat to the Uno, which was more or less unchanged since its launch, years before. But people continued to buy it, and the model was still available in 2004, when it had its first deep restyling. Fiat has produced more than 2 million units, but safety regulations made Fiat to halt production in the coming months. This will have an impact on the position of the Uno in Brazilian sales ranking. In the last months, the Uno’s sales (which include the Mille and 2010 version) have dropped continuously, as a consequence of the arrival of the new Palio. Fiat decided to launch the new generation and leave the old Palio with a lower price. It had a direct impact on the Uno 2010’s sales, as the price of the new Uno and old Palio were very closed. What will come for the Uno? An all-new Mille is expected to arrive in early 2015, in order to maintain the Fiat’s leadership in A-Segment. Meanwhile the Uno says ‘Grazie Mille’. 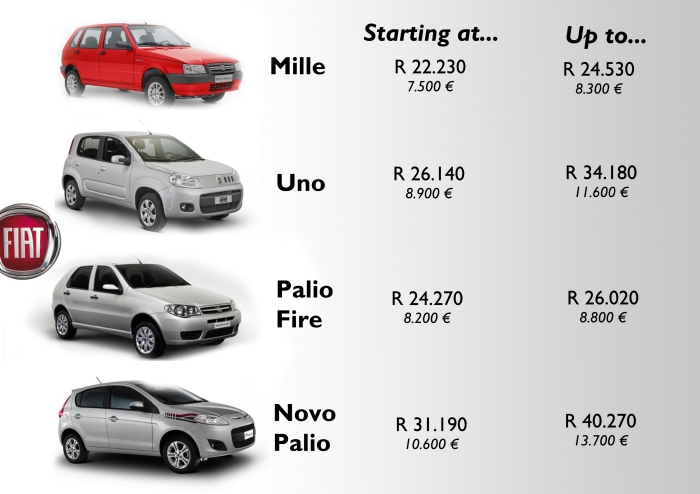 This figure shows Fiat Brazil’s current offer for the entry segments, A and B. The brand offers both generations of the Uno and Palio. Notice that the new Uno (A-Segment) is more expensive than the old Palio (B-Segment), and even if the Palio is really old (it is just a restyling of the 1996 generation), Brazilians don’t appreciate the difference between them. This is one of the reasons of the recent fall of the Uno in the Sales ranking. Its main rival: the old Palio. Source: Fiat Brazil

Thanks to my friend Leonardo Zanella for the tip