During the first semester of this year both companies, Fiat SpA and Chrysler LLC, sold 2.18 million units worldwide (Ferrari and Maserati included), up 2,4%. That’s 42 billion euros (Magneti Marelli, Teksid and Comau included), up 0,8% on 2012-I. Despite this tiny growth in registrations and revenues, the group’s profits (EBIT) fell 6% to 1,66 billion euros, or 3,94% margin. One year before the margin was 4, 23%. And contrary to what anyone could think, the reason for this deterioration is explained by NAFTA and LATAM markets, where growth rates seem to stabilize, and Chrysler Group. Yes, Europe and Fiat brands contributed to ‘positive’ results, as the cost reduction plan allowed EMEA (led by Fiat) to reduce its loses from 354 million euros in 2012-I to 185 million this year. Therefore Fiat Group (all regions) was able to rise its profits from 104 million euros to 155 million, while Chrysler Group’s profits (still highly concentrated in NAFTA) fell 9,5% to 1,5 billion. Anyway Chrysler’s earnings counted for 91% of the whole group! APAC region had also an important role in terms of revenue and profits. It had the biggest increase in both, volume and percentage change, due to more registrations in China and Australia, which helped to offset the increasing expansion costs. 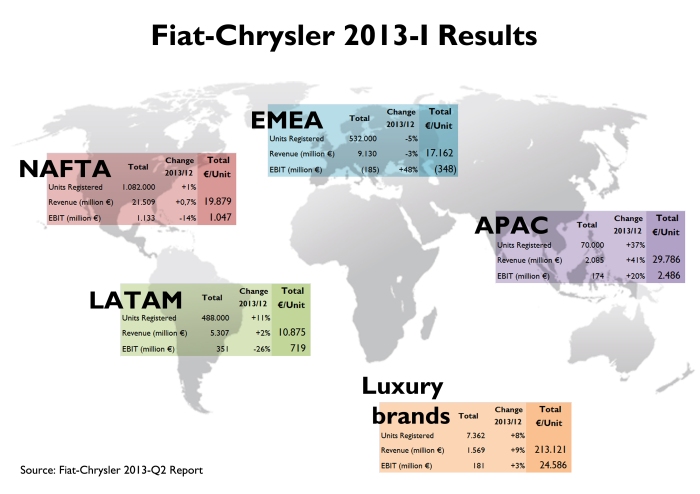 NAFTA counts for 49,6% of worldwide registrations and 51% of revenues. This region gained 1.047 euros/unit delivered. It sold more but earned less: more investment on the adaptation and expansion of factories. EMEA counted for 24% of registrations and 22% of revenues. The division lost 348 euros/unit delivered, which is still a lot, but is a big improvement on 2012-I (631 euro). In LATAM, the registrations keep growing and are quite close to European’s. Nevertheless the value of its cars is less than any other region, and therefore the EBIT/unit of 719 euros (in 2012-I it was 1075 euro). APAC region shines with the biggest jump in registrations, revenue and earnings. It is the region where the group sells its cars with the higher average price, but the still efficient cost structure (it is not too big) allows this region to gain 2.486 euro for each car registered (in 2012-I it was 2843 euro). Jeep counts for around half of total sales over there and things went quite good in China and Australia, while not that good in Japan, Korea and India. Ferrari and Maserati contributed with low volume but high revenue and EBIT considering the total units delivered. Ferrari counted for 97% of total EBIT. Maserati increased its registrations by 14% but its earnings fell 84% due to big expenses related to the introduction of the new Quattroporte. Source: Fiat-Chrysler 2013-Q2 Report

In terms of cash, the situation is unchanged. The whole group has available 18 billion euros plus 3 billion in open credits accounts, and has a total debt of 28,5 billion euros. In March 31st 2013, they owed 29 billion, and had 18,3 billion at home and almost 3 billion available in credits. In the first semester of this year Fiat-Chrysler managed to increased its deliveries (sales) no matter the big crisis in Europe, thanks to China, Australia, and somehow USA, Canada, Brazil and Argentina. This tiny growth allowed the group to increase its revenues with a lower growth due to a worse mix price-product. The cost reduction in Europe wasn’t big enough to offset the increasing industrial expenses (USA), expansion costs (China), and currency change losses (LATAM). Therefore Earnings Before Interests and Taxes fell 6%. In the meantime, Fiat keeps looking for any possibility to buy the remaining 31.51% it doesn’t own yet, as it will be crucial for the future of both companies, and specially for the future of Alfa Romeo and Lancia. In that case the Italians will be able to get Chrysler’s cash and fix some problems at home.