Finally, after many suggestions made by some readers, I decided to include the Commercial Vehicles branch of the group. Of course I’m talking of Iveco, the industrial vehicle brand of the group that doesn’t make part of Fiat Group Automobiles but is an important brand of Fiat Industrial. Following a detailed research, I was able to find the sales data for 2012 in Western Europe, and I must say that Iveco shines. Contrary to what happened to Alfa Romeo, Lancia and a big part of Fiat brand, Iveco occupied an interesting position in European LCV market. Before going into details, is better to start with a quick introduction about how the segmentation of this market is and which are the main markets and manufacturers.

The LCV sector and its segments have many definitions, and that’s why is quite hard to determine the right one. The common thing between all segmentations is weight. The LCV market works by weight, and that’s how European manufacturers conceive their nameplates. Therefore, European LCV market is divided in 3 parts: Light, Medium and Heavy Commercial Vehicles. In 2012, there were sold 900.000 LCV in Western Europe, down 9%. That number includes all the LCV weighing more than 2,8 tons. Compared to passenger car sales figures, the LCV market may look small, but the truth is that it is a very dynamic sector with better margins than passenger A or B segments. It is also quite different in terms of business. Customers are not private but companies/leasing (in most of the times) looking not for beautiful cars but endurable and reliable, and at the same time comfortable for the driver, and with easy/cheap maintenance costs.

The Light Commercial Vehicles are those trucks with a weight between 2,8 and 6 tons. They are separated in 2 groups: those under 3,49 tons and those between 3,5 and 6 tons. This group is Europe’s largest one as it counted for 74% of total sales. The Medium Commercial Vehicles segment includes those trucks weighing between 6,01 and 15,99 tons. And finally, the Heavy Commercial Vehicles are all those trucks weighing more than 16 tons. This final segment is divided in 2 groups: the Heavy Artic and Heavy Rigid. Future posts will explain this composition within each segment and will show the position of Iveco. In this market, the LCV from 2,8t, Germany is the absolute leader in Western Europe (Europe-17), counting for 29,4% of sales. Then comes France and the UK. Italy occupies the fourth place, very far from the UK. In 2012, the Netherlands outsold Spain, due to a lower fall in Dutch LCV sales compared to a big drop in Spain (-21%). Italy had the worst fall among major markets, down a massive 29%. Greece and Portugal exceeded that fall. In the opposite side there was Switzerland as the only market in Europe-17 to increase LCV sales. Austria and Denmark remained stable, while the UK had a moderate fall (-2%). 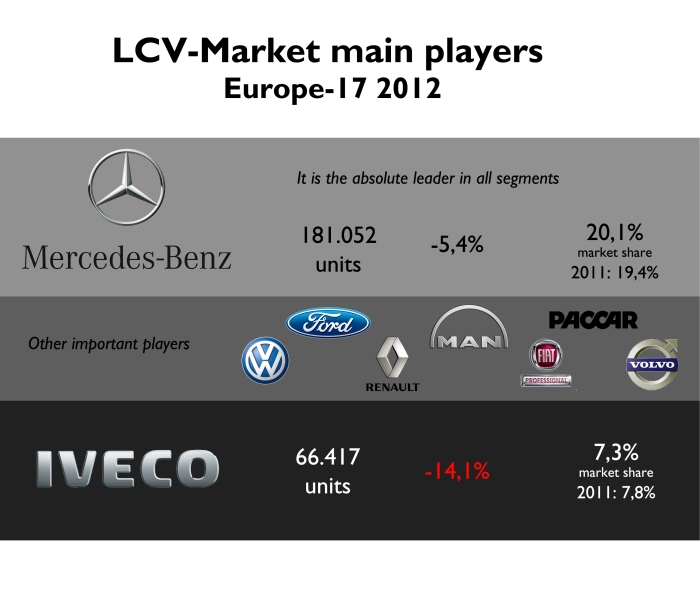 Mercedes was the absolute leader of LCV market. Thanks to its strong dependence in Northern European markets (the healthy ones), it could rise its market share. Iveco suffered the consequences of Italian crisis. Source: Fiat Group’s World data basis, UNRAE, ACEA, OICA

Mercedes-Benz is the absolute leader in this market. In 2012 it was able to rise its market share to 20,1% from 19,4% in 2011. It was the leader in all segments rely on ‘healthy’ markets, such as the Northern ones. Iveco is far behind with 6,7% market share, down 0,5 basis points, as it was highly exposed to Italian market drop. The Italian truck brand occupies the second place in the ranking of Medium LV (the smallest segment), the 7th place in Light and Heavy LV. In the Light segment, Iveco has a relevant position in Italy, France and Spain. In the Medium one, it leads in Italy and Spain, and ranks second in France and the UK, and third in Germany. In the Heavy segment, Iveco is the best-selling brand in Italy and Spain. In the rest of Europe, the position of the brand is quite weak in the Light and Heavy segments, while in the Medium segment, it leads in Belgium, Denmark, Switzerland and Greece. In the coming days I will try to make a closer analysis by segment.