It is one of the smallest car markets in Europe. Without considering the results in some Eastern European countries (where I haven’t been able to find information yet), Iceland had the best performance in the whole continent with sales up a massive 69%. Only 8.500 new cars were sold during 2012 in a country that has 324.000 inhabitants. This means that 26 new cars were sold per 1000 inhabitants. Luxembourg population reaches 542.000 and 50.400 new cars were sold in 2012: 93 new cars /1000 inhabitants. In 2007, just before Iceland’s great economic collapse, more than 19.000 units were sold. Two years later sales dropped to 2.750 units and the country’s economy was a complete disaster. The foreign exposure of Icelandic banks  and the depreciation of the krona vis-a-vis other major currencies was enough to take the economy to very bad conditions. After some years of healthy economic measures, Iceland is still far from pre-crisis economic levels, but is somehow recovering. 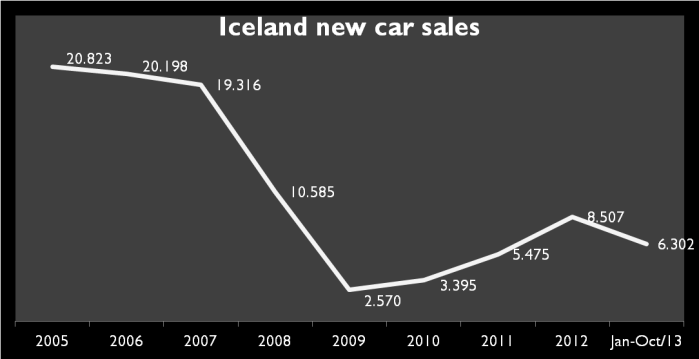 In late 2008 the 3 largest banks of Iceland collapsed as their loans and assets totales more than 10 times the country’s GDP. GDP fell 6,8% in 2009 and unemployment peaked 9,4%. In 2012 GDP rose 2,7% and unemployment declined to 5,6%. Source: Bestselling cars Blog and Index Mundi

SUV segment is the country’s most popular with 31% of total sales. It is the highest share in all Europe. SUVs are followed by C and B segments. C-SUV counted for 48% of SUV total sales, while D-SUV comes at second place with 31% share. Large and expensive SUVs are more popular than the small and cheap ones (B-SUV). MPVs are not popular at all: 3,9% share. Toyota leads the market thanks to the popular Yaris and its SUVs. But VW as a group is the largest car maker with more than 23% share. Fiat-Chrysler owns 0,61% of the market thanks to Chrysler brands: Jeep sold 29 units, Chrysler 14, and Dodge 9. Fiat brands aren’t present in Iceland.

One thought on “Iceland 2012 Results Highlights”