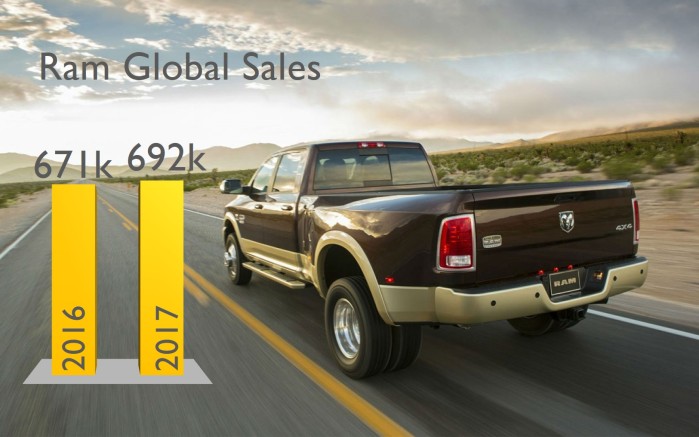 FCA is earning more money but selling fewer cars. That’s the main conclusion of its annual results for 2017. As the group continues to improve its profits in North America, Brazil and Europe, the sales of its 9 brands showed a tiny decrease last year. To the contrary of what happened last year when SUVs drove global growth in many markets, Fiat Chrysler sold fewer SUVs (-1,5%) following stagnant sales at Jeep and small contribution of Alfa Romeo, Maserati and Fiat brands. 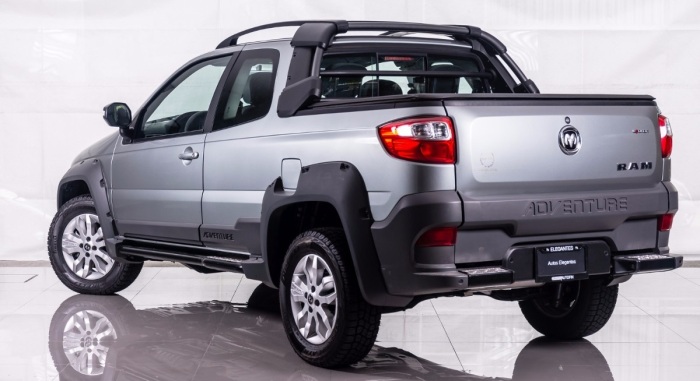 With more than 692.000 units sold, Ram was FCA’s third largest brand by volume in 2017. It was a record for the brand, which was established in 2010 when it was spun-off from Dodge marque. Ram’s volume grew by 3,2% compared to 2016 and even if it was a relatively low increase, it has proved to have a big potential among FCA brands. In fact, it is the second main driver of growth in North America, which counts for 52% of the group’s total sales.

Pickups are very popular in America with demand growing every year and now counting for 16% of total market. Ram is part of this increasing trend thanks to the popular pickup (1500, 2500 and 3500), which was the third best-selling vehicle in USA last year. The Ram Pickup is also a key product for FCA at the top of its global sales by model with 615.000 units in 2017, up by 3,2%. That was before the presentation of the latest generation at Detroit motor show this year.

As the all-new Ram Pickup will start hitting the market soon, the company expects to improve its position in USA and Canada, its main markets. Last year 97% of its global sales took place in these two countries. Large pickups are only popular there while the midsize and small ones dominate in Brazil, Argentina, Thailand, South Africa and Australia. Therefore the Ram Pickup is not a global product and unlike the Jeep SUVs, it is strongly dependent on very few markets. 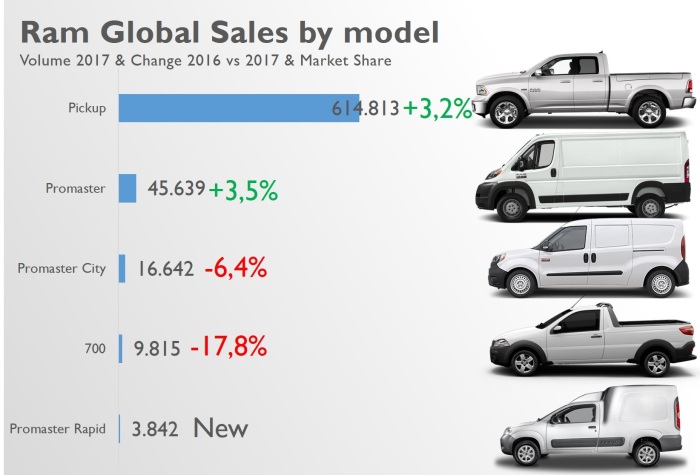 Despite the growth slump in 2017, Ram has a big potential. It is a brand well positioned  with a high awareness among American drivers. Ram plays in a hot selling segment but needs more products in order to get most out of it. If Chevrolet succeeds with two pickups in its range, the big Silverado and midsize Colorado, then there is no reason to exclude another Ram pickup sitting one segment below the popular 1500. Even if American consumers prefer the full-size pickups, there is market for smaller ones.

The Dodge Dakota was discontinued in 2011 due to declining popularity of midsize trucks. But both Chevrolet and Toyota don’t only continue to offer their Colorado and Tacoma midsize pickups but they are selling well. Last year, the Chevrolet posted the highest volume since 2005, while the Toyota sold almost 200.000 units of the Tacoma in USA, a record for this nameplate. The good thing is that none of them had a negative impact on the sales performance of their bigger brothers, the Silverado and Tundra. In fact Ford is already planning to relaunch the Ranger and Volkswagen has just announced it is working on a midsize pickup for USA.

More sales could also come from other segments. Ram should be another candidate to have its own SUV. A SUV derivate of the Ram Pickup could also grab a piece of this important segment using the Jeep’s know-how and positioned as the full-size mainstream SUV of the group. Jeep is working on a bigger Grand Cherokee, possibly called Grand Wagoneer, which is supposed to hit the market in early 2019. In my opinion, Ram should also use this car as a base to develop its own version of a full-size SUV.

Ram has demonstrated that it can sell well. The popular Pickup should not be the only case of success but the beginning of a series of new models that could bring more clients to FCA. More pickups and SUVs is what American drivers want, and is exactly what Ram needs in order to grow as a brand.