After the first analysis made by FGW about the sales performance of the new Fiat Panda and VW Up! and the Fiat 500, it is time to see how were May figures to these 3 minicars. When VW Up! was finally available in the market there was a special attention on how the leader of the segment would respond and how consumers would change their mind and shift to Europe’s largest car maker. 5 months after official launch of the German minicar and third generation of Fiat Panda, things began to get complicated to Fiat. Or at least is what sales figures show. Because from what happened last month there can be several different analysis and approaches as the comparison is made among two different family cars: in one side there are the 3 VW, Up!, Citigo and Mii, all in 3 and 5 door versions. And in the other hand there are Fiat 500 (only 3 door) and Fiat Panda (only 5 door). But results can be seen also from the different moments they are living: the Germans and the Panda are enjoying their first months of commercial life, while the unique Fiat 500 will soon have its 5th birthday (July 4th) without any specific facelift or deep change. However here are the results. 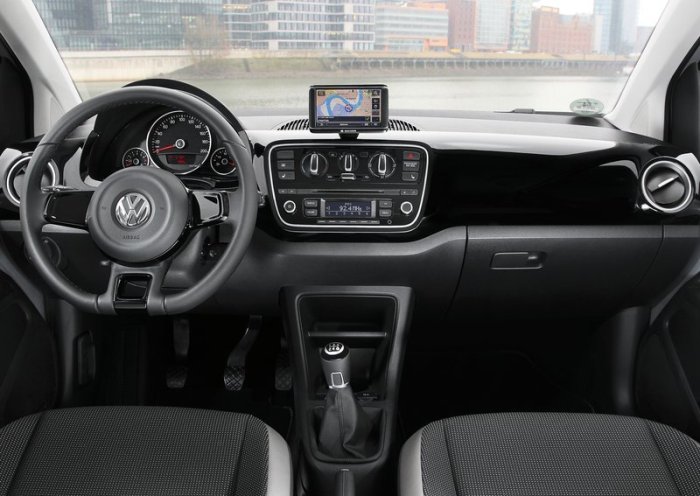 The first thing that must be considered is that UK sales figures were not included in the analysis as there is only data for 10 best selling cars. The lack of UK results affects considerably Fiat 500 as it was the tenth best selling car in that country during May/12 with 2.823 units. So the countries to be analyzed were the same of April’s analysis: Austria, Czech Reublic, Denmark, Germany, Spain, France, Greece, Italy, Ireland, Netherlands, Poland, Romania, Slovakia, Slovenia, Sweden and Switzerland, or in other words, those European markets with available data. In May/12 the trio Up!/Citigo/Mii sold more than Fiat 500! it is the first time the small VW have better results than the popular 500. The Germans sold 11.935 units, up 44%, against 10.818 Fiat 500, up 23%. Unlike what one would think, the difference is explained by what happened in smallest markets because both models sold pretty much the same in their native countries: 6.000 units in Germany and in Italy, and vice versa, 1.224 units of VW sold in Italy and 1.572 of 500 sold in Germany. In France they both sold more or less the same, around 1.050 units. But the big differences come from Netherlands and Denmark where the VW Up! has become really popular. In the rest of small markets people are shifting from Fiat to VW. But the analysis must be also done taking into account Fiat Panda figures. 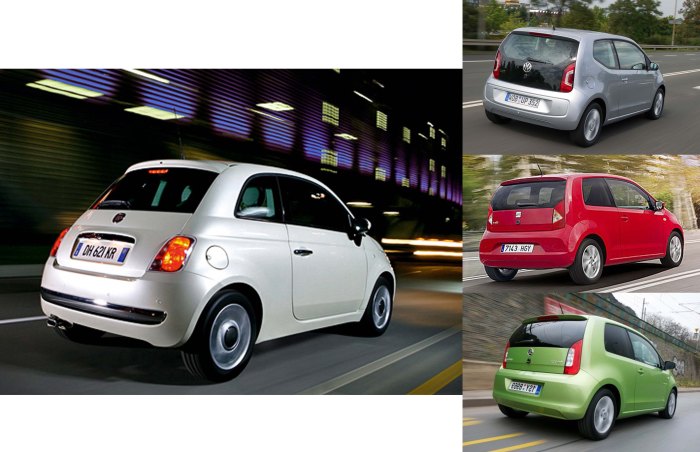 The third generation is doing quite well in Europe. Although it has not reached yet its predecessor sales numbers, the small Fiat continues to increase the number of units delivered. In May 18.546 Pandas were sold in these countries, up 11%, less than its brother and Germans competitors, but is still the absolute leader of the segment (it was Europe’s 9th best selling car). Of course it depends a lot on Italian market, where it sold 69% of the total, but the new car had interesting numbers in the Netherlands (beating the German trio), and Germany. Anyway in Panda’s figures there are included both, the previous and new generation. It had some problems in Austria, Denmark and Spain, but its registrations in Italy rised 19% compared to April figures. Both Fiat results indicate that the brand is still the leader of the segment as they sold 2.5 more times than the 3 VW. And that’s the point to be considered. It is true the Germans passed Fiat 500 sales by more than 1000 units, but it is also true that in that comparison there are included 3 ‘different’ models (Up!, Citigo and Mii) against just one, the Fiat 500. It is also true that though the German trio sold more than Fiat 500, in the first case there are included two body types, the 3 and 5 door versions, while the Fiat 500 is only available in 3 door version. At the same time the comparison does not take into account that Germans are in their first months of commercial life, while the 500 is on its 5th year. And in the case of the Panda, the same problem of body type could apply. It is also relevant that Italy represents a big part of Europe’s A-segment car sales, and it is now facing really tough times.  In terms of costs is very important to mention that the 500 and Up!/Mii/Citigo are all made in low labor costs countries (Poland and Slovakia) while the latest Panda is made in Italy, where labor cost is higher. And finally one important thing to consider is that Fiat may be the leader of A-Segment but is now competing with the big power and excellent marketing of Europe’s largest car maker. 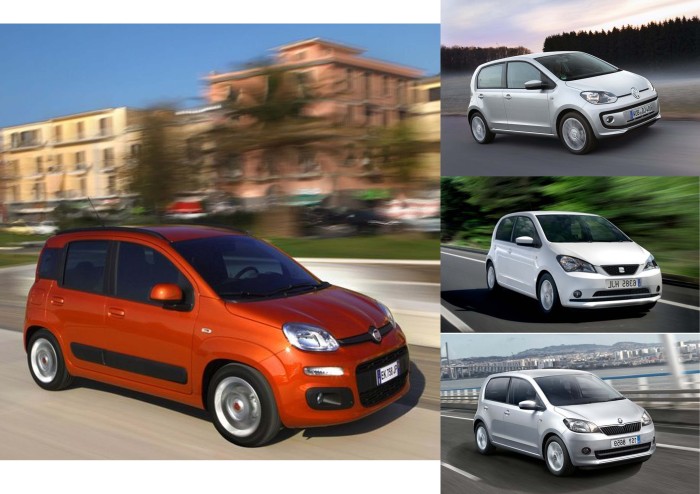 Fiat Panda offers much more habitability than its German competitors as it is conceived as a small utility vehicle and not as a regular A-segment car.

Year-to-date results show that Fiat Panda reigns and accumulates sales equivalent to the sum of Fiat 500 and VW Up!, Skoda Citigo and Seat Mii. The German trio is still behind Fiat 500 by 11.000 units as it had a very bad begining. But things seem to change and they finally begin to be a threat to Fiat 500 leadership, unlike what happened during April 2012. The VWs reigns in Germany but with very far sales numbers from what is seen in Italy with Panda. And also in the land of Skoda Citigo, Czech Republic; in Denmark where the VW Up! could become the country’s best selling car. Also in Slovenia, Slovakia (the country where they are produced) and Sweden. On the other hand both Italians are extremely popular in Italy, France, and somehow in Germany and the Netherlands. No matter what the reason is for this change in A-segment market, it is clear that Fiat must do something to maintain the sales of its beauty 500 or maybe accelerate a big facelift, well they can not loose market share in the only segment where they feel secure.

Sales figures for Fiat 500 and Panda, and VW Up!, Skoda Citigo and Seat Mii. Source: bestsellingcarsblog.net