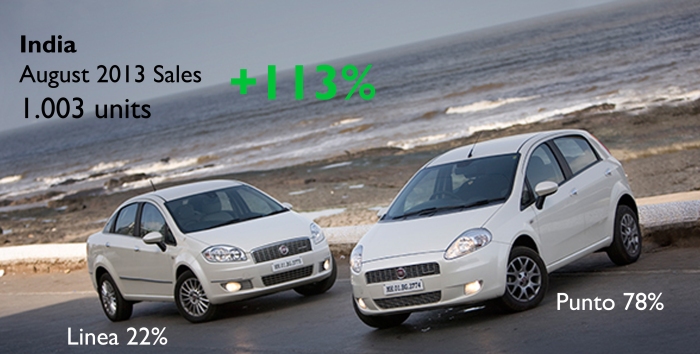 Even if it is a small number, only 0.55% market share, it was the first time since May 2012 that the company sees a 4-digit sales number. The Punto keeps its importance in the mix, no matter the Linea’s upgrade. Photo by: Overide.in. Source: Carsitaly.net and Team-BHP Forum

More than 1.000 units sold in one month. This result wasn’t possible since May 2012, when sales dropped 53% on May 2011 (the last month of strong growth). Since then, Fiat’s share shrunk from 1,25% in 2009 to 0,29% in 2013 YTD, after several product and distribution problems. Competition became tougher with more offer coming from foreign manufacturers, while the agreement with Tata didn’t prove to be the best thing for the success of Fiat cars. The brand kept its range of products without big changes, while VW, Skoda, Renault and Nissan introduced lot of products with big success. One good example is the Renault Duster in the small SUV segment. Indians keep buying small cars (for taxes reasons), but SUV segment has had a big growth in the last months. Fiat offers the Punto and Linea. One more problem is the size of these cars. Indian regulations indicate that the excise duty for cars length under 4 meters is 12% against 24% for larger cars*. Despite that big advantage, Fiat, which is widely known for building efficient small cars, doesn’t sell any car shorter than 4 meters. The Punto and Linea are good cars, and they are built locally, not only to avoid import taxes, but to offer a better car that fits Indian requirements. Nevertheless, it is not enough, and Fiat must enlarge its offer by producing a small city car. The Uno or Panda could be a hit in Indian roads, but for a reason that is still inexplicable to me, Fiat is still one of the few car makers that doesn’t offer any city-car in India. 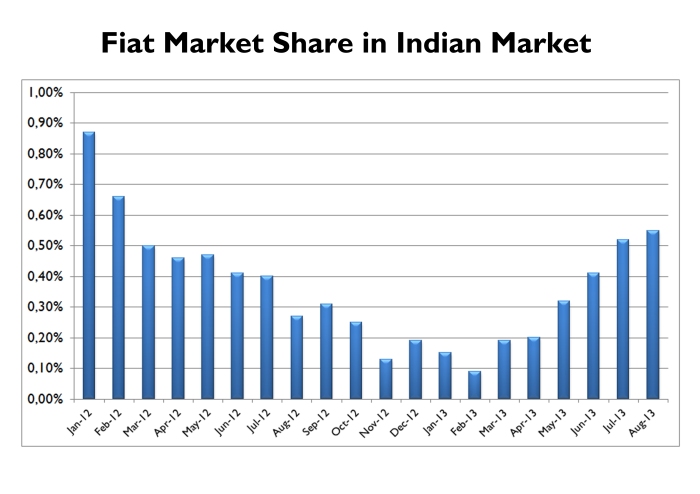 Despite current macro economic problems with continuously increasing fuel prices, high interest rates and a falling rupee, Fiat has been able to increase its market share from nothing to a marginal 0,55%. Notice that Skoda brand, which is somehow strong thanks to a wider range, sold 1.374 cars in August 2013, with 0,76% market share. In August 2012 it sold 1.789 units, with 1,04% share. Source: Carsitaly.net and Team-BHP Forum

But things are getting better. After the end of the distribution agreement with Tata, in which the Italian cars were sold in Tata’s dealerships, Fiat took control of the final sale and opened its own dealers in some important cities. Now the Punto and Linea don’t have to compete with the Tata Indica/Indigo in the same place, and Fiat can differentiate its dealerships with a special touch in its ‘Fiat Caffé stores‘. Besides, they improved the offer by adding a Turbo-Jet engine to the Linea. That’s how in August 2013 the brand sold 1.003 cars, up 113% on August 2012, and even more units than July’s record of 928 cars sold. Even if YTD figures indicate that Fiat sales have fallen a massive 49% (in January and February sales fell more than 80%), after two consecutive months of positive growth, maybe is the time of the resurrection of the brand in that country. It is quite early to determine that this trend will continue in the next months, but at least the effort made has finally had a result. The next step is to introduce a sporty Abarth Punto and Jeep brand, but these products won’t help in terms of volume but in terms of image. I insist on bringing the Uno as the entry car of the brand. That’s how Fiat will be able to gain more market share.

8 thoughts on “The resurrection of Fiat in India?”