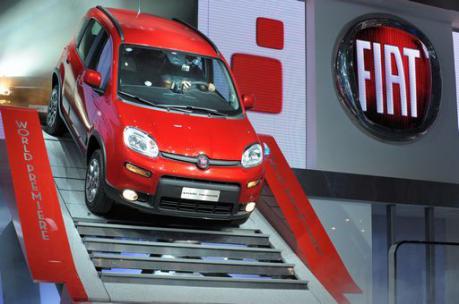 In October 2012 Fiat Group (Fiat, Lancia, Alfa Romeo, Jeep, Ferrari and Maserati) sold 34.075 cars, down 10.4%. The market share jumped from 28.49% to 28.92% as total market declined 12% with 117.000 units delivered, 16.000 units less. Someone would say it’s still a bad scenario for car registrations but October was the best month of the year in terms of fall as it was the shortest one. After 4 months of falls above 20%, Italian car industry slows down its fall and allows Fiat not only to keep its leadership but to increase its market share thanks mainly to Alfa Romeo and Fiat brand. The first one sold the same of one year ago (3.331 vs. 3.337 cars) which is certainly a good result allowing it to rise its market share from 2.5% to 2.85%. Fiat brand, which counts for 73% of the group’s sales in Italy, sold 2.395 cars less than Oct/11, which is less than the fall of brands with less market share such as Ford (-2.856 cars) and Opel (-2.760 units). In the other hand there is Lancia, down 19%, Jeep, -32%, Ferrari, -48% and Maserati, down a massive 52%. Interesting to see how the brand with lowest quantity of models, Alfa Romeo, is the one pushing up Fiat Group’s market share, while Lancia, with the popular new Ypsilon and more models coming from America, seems to not stop falling. Lancia, along with Ford, Opel and Renault the big car makers to decline their market share while Fiat, VW, Citroen, Toyota and specially Peugeot gain in this storm. 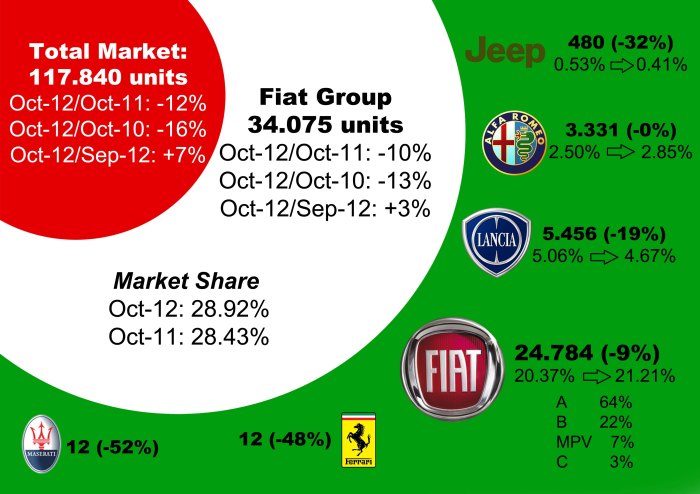 Italy October 2012 Car registrations. The market seems to stop falling as it was doing in the previous months. Fiat sells less cars but increases its market share thanks to better Panda sales. Good job of Alfa Romeo and its Giulietta. Lancia worries with its new Ypsilon. Source: UNRAE, www.bestsellingcarsblog.net 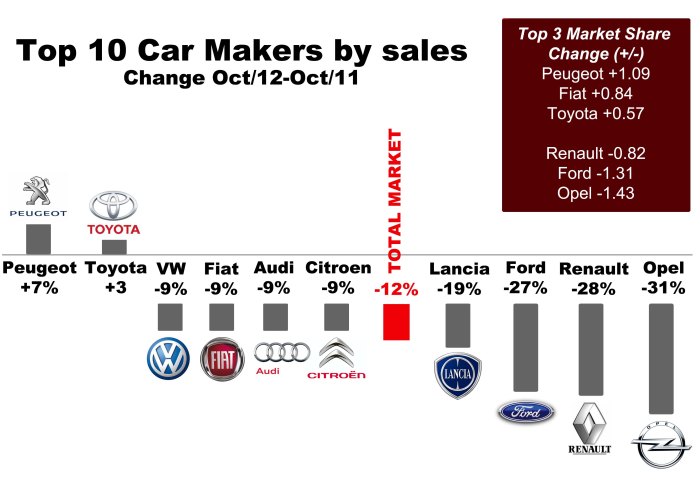 The big fall of the market is mainly explained by terrible results of Opel and Ford, two big players. Their lost market share is being caught by Peugeot, Fiat and Toyota mainly. Source:  UNRAE

The Panda is Italy’s best-selling car by far. October 2012 was the second best month so far this year in terms of units sold (after May) with more than 12.000 Pandas delivered, up an interesting 32%. These are good news for the small Fiat specially now when production of second generation will stop in December. Those registrations more than double Punto ones, which continues to slow down. The car that used the top-seller occupied second position in the ranking with 5.500 units, down 37% and is the model that mainly negatively affects the whole group’s results. One year ago it was ahead of its main rival in Italy, the Fiesta, in 4.187 units. In October 2012, the difference between them is only 1.501 cars. The worst has not arrived for this model as it will have to keep going as it gets old and the Fiesta will soon have a facelift that may help it to surpass Punto sales in Italy: a catastrophe for Fiat. One more Fiat, the 500 keeps falling but as usual, not as bad as it could be. Despite it is 5 years old, the Cinquecento continues to be really popular in Italy. Compared to Oct/11, the small Fiat gains market (from 2.9% to 3.1%) share despite the good performance of the VW Up!.  The new 500L had a bad performance after its good start in September with 702 units. The reason for this fall is yet unknown but its cousin the Lancia Musa could be part of it. The small MPV from Lancia increased its sales 77% partly because the end of its commercial life arrives and dealerships want to get out of stock with interesting discounts. And as the Musa and 500L make part of the same segment, Fiat’s new MPV could be affected by the final days of Musa. The Ypsilon really worries as its fall does not stop since some months ago. It is why it seems to be more a car facing its decline period of commercial life rather passing its best months as it was launched some months ago. If Punto and Ypsilon are considered, Fiat Group is losing a big market share in ‘B-Segment’ as other car brands gain a lot (Peugeot and Toyota). Finally the Giulietta from Alfa has a great performance, rising its registrations 19%, but still behind the absolute leader of the segment.

The only Fiat products to grow are Panda and Giulietta. In ‘B-Segment’ the situation is really bad and the Punto does not rule with a big gap as before. Source: UNRAE, www.bestsellingcarsblog.net

Compared to September figures, Fiat 500L sales declined as a consequence of big penetration of Lancia Musa and big jump of Citroen C3 Picasso (which sold less than 600 units in September). Source: www.bestsellingcarsblog.net