If there was any brand of Fiat-Chrysler to produce awesome results during 2012, it was certainly Jeep. The SUV  brand achieved a record in terms of registrations: 701.626 units. This excellent number allows this brand to get close to its 2014 target of selling 800.000 cars. Sales increased 19% thanks to US market, and somehow China and Australia. This analysis was able to get data for 62 countries counting for 95% of total sales, and shows that in 43 of them, Jeep increased its registrations, and only in 10 sales dropped (there is no 2011 data for the remaining countries). The group is doing a good job with these SUVs, as the brand is back in NAFTA region (after the crisis years), and gets ready to conquer Russian, Chinese, and Russian markets.

A record year that surpasses the previous record set in 1999 with 675.494 units. The Grand Cherokee les sales with 32% of total, followed by the Wrangler (28%), and Compass (15%). For the source please see at the bottom of this post

It was the second best-selling brand of the whole group and the best-selling one of Chrysler LLC. It is also one of the most international ones with the highest potential (above the one that can have Alfa Romeo and Maserati). The awareness is high enough to start thinking of producing abroad and depend less on North American market, where the brand sold 3 out of 4 cars last year. Jeep has presence more or less everywhere but in many cases with very low market share. That’s why the brand is working on 4 different projects: to start production in China in 2013 (along with GAC), and in Russia (JV with Sberbank). In Italy there is a project to build the Fiat 500X/Jeep B-SUV (it will be the first small SUV of the brand). And finally, in India the brand will be officially introduced in late 2013, first with imported models, but later with a locally produced small SUV in a common project with Fiat.

Jeep’s main markets are quite different from Fiat ones. This brand is very strong in North America. China became the second largest market in 2012 thanks to the success of the Compass, even though it has a very low market share. Australia was another market where the brand had a big jump. Venezuela is also important as there is local production (the only place outside USA). Only 2 European countries in the top 10. For the source see at the bottom of this post

This list shows Jeep sales by country and region. Notice how important is USA and North American region for the brand, and how small is Europe in terms of volume. Asian region was boosted by China and Australia’s good performance. For the source please see the bottom of this post

In my opinion, Jeep will make it in those markets. SUV segment is growing really fast over there and Jeep could be considered the most famous SUV brand. Second, its brand image is really strong even in those markets where there is a low presence. Still, there are a lot of things to do: first of all, the brand needs to depend less on USA market (68% of total sales) and expand its operations in emerging markets and Europe (5% of total sales). Then it needs more competitive products for lower segments, as C-SUV segment is one of the fastest growing ones and the Compass/Patriot are kind of old. The new Cherokee is expected to success after its introduction in America in June, and late 2013 in Europe. The future? is promising. Unlike Alfa Romeo, Jeep is already making use of its great potential by expanding its operations with tangible plans. This year will be crucial for the target for next year, as the updated Grand Cherokee and the all-new Cherokee are supposed to boost total registrations everywhere. If they work, I have no doubt that the brand will be able to sell around 750.000 units or more in 2013 and get close to 2014 goal. It’s more a matter of time. 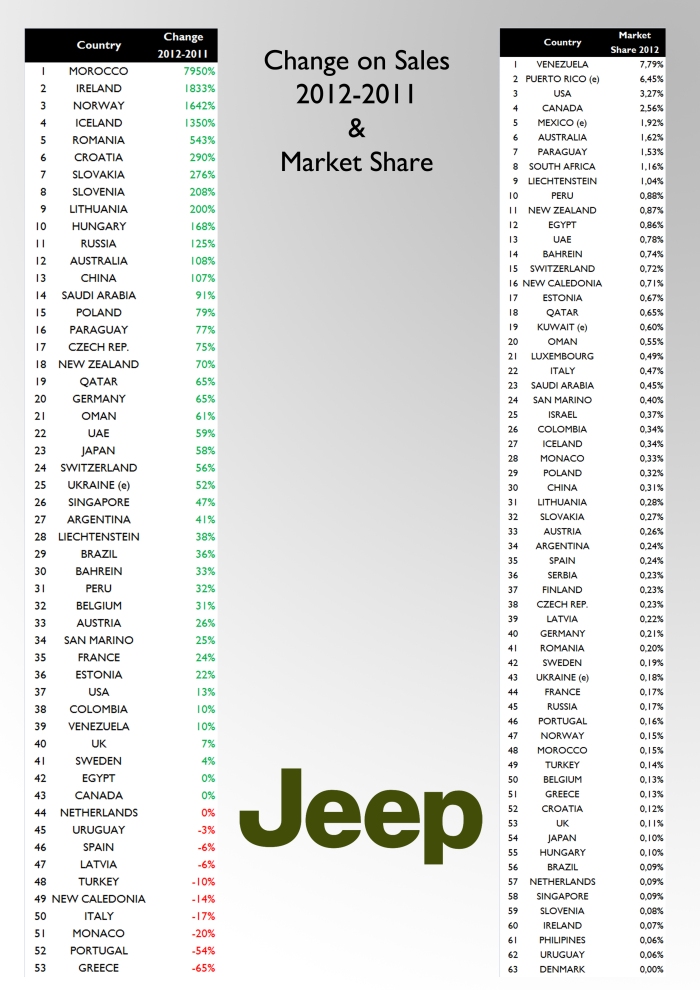 Jeep was able to increase its sales registrations in almost all countries where it is available. Russia, China and Australia’s jump allowed the brand to reduce its dependence on USA. In terms of market share, USA isn’t the first country: Venezuela occupies the first place when it is about market share, followed by Puerto Rico, and then USA and Canada. Too bad the market share results in Europe, and Brazil. For the source see at the bottom of this post